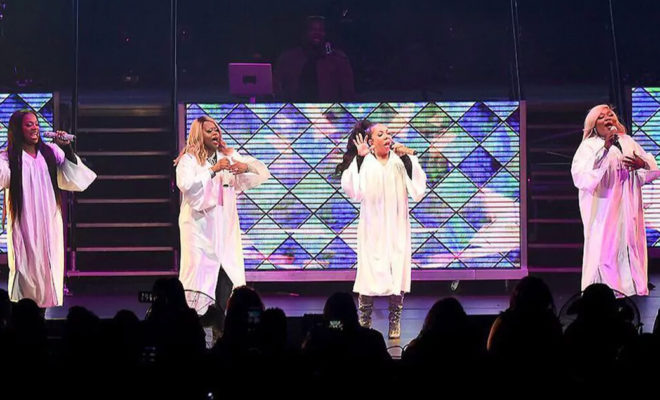 Fond memories and reality television came to life Saturday night at the Microsoft Theater, where the R&B quartet Xscape played the first of two concerts to finish a reunion tour it launched last year.

A platinum-selling operation throughout the 1990s — any R&B fan knows “Just Kickin’ It” and “Understanding” — Xscape broke up near the end of that decade, the result of personal tensions as well as the emergence of a new generation of girl groups like Destiny’s Child and 702.

Yet Kandi Burruss and Tameka “Tiny” Harris went on to find second acts as TV stars: the former on “The Real Housewives of Atlanta,” the latter on “T.I. & Tiny: The Family Hustle,” which documented Harris’ marriage to the rapper T.I. (The bandmates also won a Grammy Award in 2000 for co-writing “No Scrubs” for TLC, one contemporary group that managed to stick around longer than Xscape.)

So when Burruss and Harris reteamed with sisters LaTocha and Tamika Scott for an acclaimed performance on the 2017 BET Awards, Xscape wasn’t merely playing for nostalgia; it was capitalizing on the modern celebrity that allowed the quartet to assemble a high-profile road show with opening sets by Monica and Tamar Braxton, two fellow R&B veterans who’ve also allowed cameras into their lives.

You could sense the reality effect at the Microsoft, where the audience was a mix of folks in their 40s and people clearly too young to have seen Xscape the first time around. At one point in the show, Burruss brought out her husband, Todd Tucker, for a sexual pantomime that had more to do with the couple’s onscreen personas than with the Xscape slow jam it was set to.

That’s not to suggest that the music didn’t matter. Churchier than TLC but with more rough edges than En Vogue, Xscape achieved a signature sound on its 1993 debut, “Hummin’ Comin’ at ‘Cha,” which the group made under the supervision of its hitmaking producer, Jermaine Dupri.

And here that sound was largely intact as the women blended their voices with impressive precision in “Just Kickin’ It” and “Tonight.” Xscape’s rendition of the Jones Girls’ “Who Can I Run To” rode a deeply sensual soul groove, while “Is My Living in Vain” had the singers don silky white choir robes to echo the Clark Sisters in that durable gospel tune.

My hubby @todd167 said this song doesn’t go with that clip. I get why @hauseofglam used it as the background music… at least for me it made sense. The lyric said “Lord fix my heart so that I may be used” & “Lord I’m not worthy of all these blessings”. If God didn’t fix my heart then I might not have been blessed to do this amazing tour with my girls & experience the love of thousands of fans across the country. & I would’ve missed all the great experiences along the way! So the song works to me. Thanks @hauseofglam for making this video of highlights from #thegreatxscapetour! #xscape #junesdiary #zonnique #TamarBraxton #Monica

Xscape didn’t play its two new songs, neither of which features Burruss.

But if that rift suggested the presence of some “Housewives”-style drama inside Xscape, the women papered it over to close the show with a gorgeously harmonized take on “Understanding,” one of the great ’90s R&B power ballads.

It was a moment of pure musical emotion, no juicy back story required.