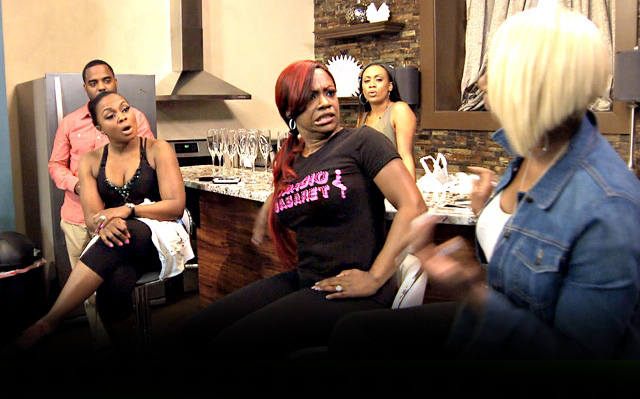 Evil spirits, police sirens, and fists flying! Would you expect anything less from the upcoming season of Bravo’s “Real Housewives of Atlanta”? But before we get into the down-and-dirty drama in this exclusive sneak peek at Season 6, NeNe Leakes reminds us (and a room full of kids), “I generally walk into every room and own it.” The star’s acting prospects might be up in the air (“The New Normal” was canceled and “Glee” was delayed), but it clearly doesn’t affect her confidence.

Kenya Moore comes swinging in on a sheet à la Cirque du Soleil and twirling like crazy in a wedding dress, but don’t worry; she assures us that she’s crazy in a good way. Phaedra Parks is dealing with new baby Dylan, but hubby Apollo Nida seems distracted by text messages and sexual propositions. And Porsha Stewart, who’s going through a divorce, tries to embrace her newfound freedom but ends up in the hospital. Can’t we all just get along? Maybe, but it wouldn’t make for juicy guilty-pleasure TV, now would it?

“The Real Housewives of Atlanta” Season 6 premieres Sunday, Nov. 3 at 8 pm on Bravo.