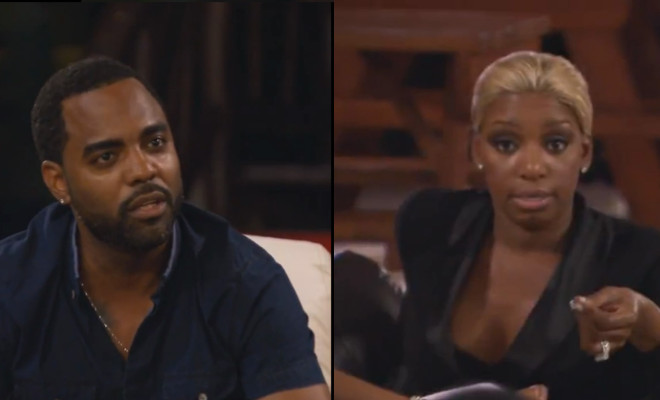 NeNe Leakes has seen her fair share of dust-ups on Real Housewives of Atlanta — hell, she’s in two fights in next week’s episode alone! — but we never expected to see Kandi Burruss’ sweet-natured fiancé Todd Tucker lose his cool. According to a sneak peek from next week’s March 23 ep, Todd will be getting riled up — and by NeNe, no less!

In the preview, we see Todd raise his voice to Mrs. Leakes while the group is all sitting together, though for what exact reason, we’re unsure.

“It’s okay to school me, but don’t f—ng talk down to me and then school me,” Todd says forcefully to a bewildered NeNe.

But NeNe seems unrelenting about whatever behavior she displayed to upset him. “If you don’t like the way I say it, then that’s your problem,” NeNe shouts back.

We’ll have to wait until Sunday to find out what exactly the current Dancing With the Stars contestant said to vex Kandi’s man so much, but we can probably hazard a few guesses. Considering how outspoken with her opinions NeNe is, most likely she tried to weigh in on his situation with Mama Joyce…and by weigh in, we mean commanded Todd to do something.

Todd isn’t the only Househusband NeNe faces off with on Sunday — the ep also features that long-awaited Gregg Leakes-Peter Thomas fight, which apparently ensues after NeNe and Peter get into it, which NeNe saying, “You stop trying to be a damn b—!” Eek!

Are you shocked to see Todd and NeNe at odds? Tell us in the comments below.