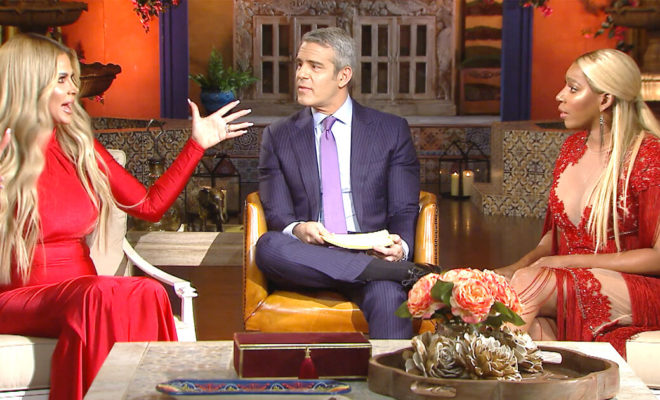 NeNe’s Issues With Kim Began Before The Season Started

The two reality stars, who famously fought at RHOA‘s first reunion back in 2008, have a long history of butting heads. And this year they had a plenty of battles, one of which stemmed back to a time they saw each other at a mall before the Bravo cameras were rolling.

Though they didn’t speak there, Zolciak-Biermann still clocked that Leakes’ car was parked in a handicapped spot. The mother of six took a picture which she later shared to social media, and happily brought it up to Leakes on camera while at the former Fashion Police host’s white party.

Zolciak-Biermann has since continued to bring it up, implying Leakes was illegally parking in the spot despite Leakes saying the pass belonged to her husband Gregg, who had just been hospitalized for heart issues.

All of this has left Leakes pretty angry. At the reunion, she doesn’t waste time bringing it up as an example of Zolciak-Biermann’s supposed shadiness.

“I saw Kim before I had the event at my house, at the mall,” Leakes says. “And she had her head up in the air, acting like she couldn’t speak. Then she’s going to leave the parking lot and come back and video my car and talk b——-? She walked into my house, knowing that I saw her a–, like, ‘Did I see you when you parked in the handicap spot?’ But did you see me, bitch, or did you not see me!?”

“She is a liar!” Leakes adds of Zolciak-Biermann. “She walked right into my house acting like, ‘Didn’t I see you or didn’t I see you?’ ”

As angry as Leakes is, Zolciak-Biermann isn’t backing down. “Who gives a f—?” she shouts back. “You’re that put out of shape cause I didn’t say hi?”

Don’t miss part 2 of the RHOA reunion tonight at 8/7c on Bravo.