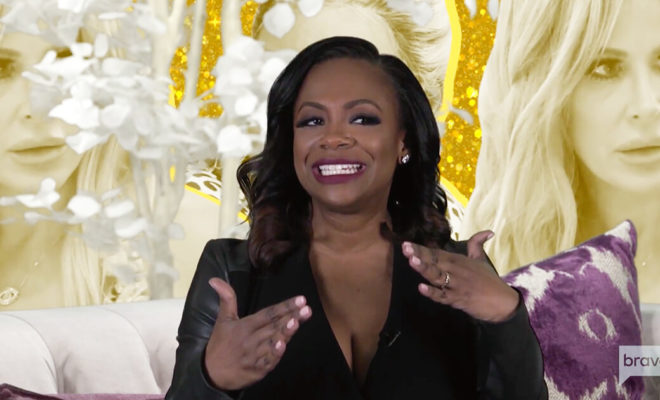 On this week’s After Show, the Real Housewives of Atlanta weigh in on the escalating beef between NeNe Leakes and Kim Zolciak. A few of the show’s stars, Cynthia Bailey, Kandi Burruss, NeNe and Kim all throw their two cents in on roachgate and Kim’s many health issues.

NeNe shared, “Listen, I was just having a good time. I mean, damn, it’s a wonder you’re still walking.” She added, “When I said Kim had cancer, thyroid, open heart surgery…these are all the things she’s said she had. Did you see me in the world saying I had roaches?”

Cynthia’s take: “I live on a lake so you might see anything crawling around my house. I mean, you may see a snake. Anything. I’d be happy to see a waterbug at this point.” She added, “Let’s just say if Kim comes to Lake Bailey, she’ll be checking her cell phone, and anybody’s she brings with her, at the door. There’ll be a basket of cell phones.” Kenya chimes in “she probably has one hidden in her wig. You’ll have to have her check her wig, too.”

Kim shared her side, “I’ve let NeNe talk so much shit about me through the years. It’s like ‘you know what, bitch? I don’t take that shit lightly. You should worry about the bugs in your fu**king house.’” She continued, “I don’t have any regrets on sending the video whatsoever. I feel like enough is enough. I’ve allowed you to talk shit for so long. You can dish it, bitch, but you can’t take it?”

Kim also added, “Brielle and Brent [NeNe’s son] have been friends throughout all these years. They talk on Snapchat, they meet up. They do their own thing.” Kim says she explained the decision to share the video but Brielle didn’t agree with the “tit for tat” going on.

Kim revealed that Brent and Brielle haven’t talked since the roachgate mess, but she thinks Brent knows that Brielle has a good heart and wouldn’t do anything to hurt them. Kim says it’s all gotten out of hand, going from banter back and forth to something way beyond.

Kandi’s take: “I felt like Kim sending the roach video was very foul, but I don’t think it hits her as in she said something racial. I think sometimes she’s just saying it like ‘yeah I told that bitch’.”