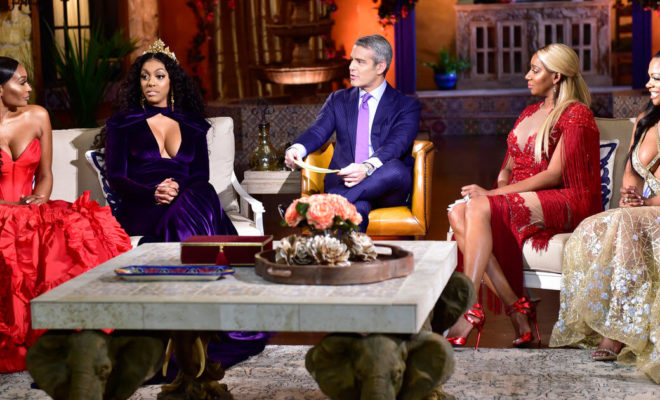 Who Needs a Spiritual Bath After Season 10?

After watching season 10 of the Real Housewives of Atlanta, it’s clear that there’s a need for some serious cleansing.

So who’s in need of a spiritual bath? There’s only one person the ‘wives seem to all agree on. Find out in the exclusive clip below.

Part one of The Real Housewives of Atlanta reunion airs on Bravo this Sunday, April 8, at 8/7c, and we are in for some serious fireworks.

The Kim Zolciak-Biermann vs. NeNe Leakes war is here. The women finally go head-to-head, and despite Andy Cohen’s instructions, they cannot stay seated on the couch.

“Jealousy’s a disease. Get well soon, b*tch,” Kim says in the video. When the women all start yelling at her, she also adds, “I don’t have my own show for no reason!”

While the main disagreement appears to be between Kim and NeNe, Kandi Burruss can’t help but get involved as well. “You were sitting on the sidelines watching us like a f—king fan,” Kandi says.

After Kim looks completely shocked, NeNe stands up and screams at Kim. “You are fu—king trash,” she yells, waving her hands in the air.

Eventually, Kim storms off the set. Backstage, she breaks down in tears to Sheree Whitfield. “I’m so upset with you,” Kim says. “Every one of those motherf—kers on that couch owe the world a f—king apology.”

Kenya Moore, Cynthia Bailey and Porsha Williams are also part of the drama-filled reunion, and it’s not going to be pretty.