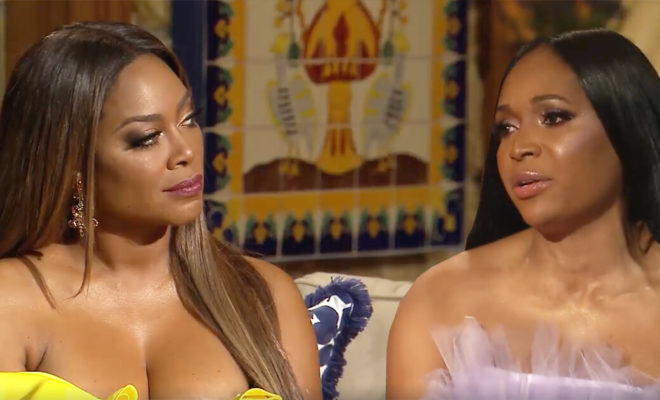 Marlo Hampton and Kenya Moore will apparently have a ferocious faceoff at the RHOA Reunion that will include a bombshell.

As previously reported Kenya and Marlo used to be friends, but back in season 9, Marlo said their friendship dissolved because “fake, phony, mental” Kenya stopped inviting her out.

Now that season 10 has wrapped it looks like the claws are back out between the two in particular over Marlo’s digs at Kenya’s estrangement from her mother and Kenya’s claims that Marlo’s got a seedy secret profession.

During the upcoming reunion, viewers will see them clash over both topics. Marlo previously took a dig and said that Kenya’s own mother “doesn’t wanna be bothered with her.”

Marlo: “Kenya and I that doesn’t stand anywhere because I feel like she really wasn’t my friend, she was just befriending me due to she and NeNe not being friends.”

Kenya: “With Marlo, I felt like I liked Marlo but when Marlo and I crossed the point of no return was when to that camp—-that crosses all lines, that speaks to character. Once somebody shows you who they really are, that’s all you need.”

Things then got especially nasty over those “fake husband” rumors and rumors that Marlo’s actual profession is prostitution. Kenya then dropped a bomb and alleged that Marlo tried to blackmail NeNe with her Italian ex John Kolaj. If you can remember, John was the man NeNe briefly dated after divorcing her husband Gregg.

Marlo: “How much did you pay bae this year?”

Kenya: “You are so worried about my life and my husband. Maybe if you stop f*****g everybody else’s husband you can get one of your own.”

Marlo: “I hate the lies, “slut”, “whore”—where are the receipts? You’re good at finding receipts.”

There’s no holding back on the RHOA reunion tonight at 8/7c on Bravo.