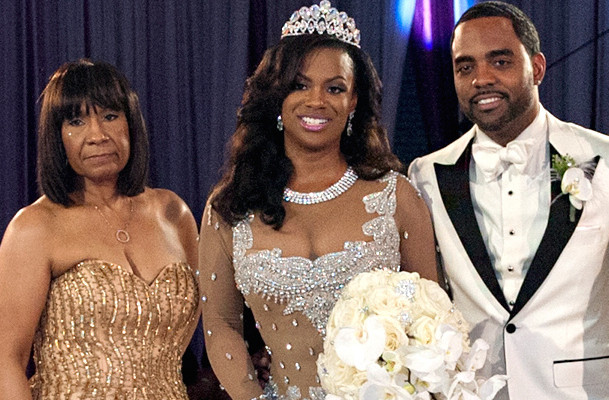 Kandi’s Caught in the Middle

Bravotv.com: Did Johnnie surprise you with how much he stepped up the wedding planning?
Kandi Burruss: Yes! I was happy with the fact he came back with a more positive attitude and more options.

Bravotv.com: What were you looking for in the dancers you auditioned?
Kandi: I wanted people who could really dance and catch on quickly, because we didn’t have much time.

Bravotv.com: Has Riley watched ‘Coming to America’ yet?
Kandi: Yes. Right after the rehearsals we went home and watched it.

Bravotv.com: Has your relationship with your dad improved since the wedding?
Kandi: Somewhat. He does try to reach out more. I am the one who needs to do better. I guess I am so used to the way our relationship always has been, so now I don’t think to call that often. This is something that I have to work on.

Bravotv.com: Were you nervous at all about using such a raw space for the wedding? What was your favorite feature of the space?
Kandi: I was not nervous at all. I went online and looked up pictures of amazing weddings, and then I googled before and after pictures of wedding venues. I saw lots of places that weren’t all that nice but turned out amazing. You have to have vision. Looking back at the episode, I was shocked at what I saw. I’m kind of weird in a way, because back when we taped it I didn’t look at La Fais Do Do and see what was actually there. I only saw what it could be. Obviously my team didn’t see the vision at the time, but they didn’t have to see it as long as they were willing to take my lead and make my vision come to life.

Bravotv.com: Did Don Juan’s negative comments about the space surprise you?
Kandi: No. Don Juan can be negative at times, but he always goes along with what I want. He has my back 100%, even when he doesn’t agree with me.

Bravotv.com: Why did Todd’s “warning” about Momma Joyce rub you the wrong way?
Kandi: I just didn’t like what he said. I don’t take it well when people say I’m warning you as if it’s a threat… I don’t like threats.

Bravotv.com: How long have you known Tan? How did you meet?
Kandi: I met Tan when I was 14. We were doing summer tryouts for the performing arts program for Tri-Cities High School of The Visual and Performing Arts.

Bravotv.com: Was it nice seeing Todd bond with your dad?
Kandi: Yes. I thought it was really nice to see Todd with my Dad having a bonding moment.

Bravotv.com: Had Todd told you that story about how he knew you were the one?
Kandi: Yes.

Bravotv.com: Were you hoping Apollo would make Todd buff for the wedding?
Kandi: I love Todd the way he is. If he chooses to get buff, that’s cool too. Either way he is sexy to me.

Bravotv.com: How frustrating was it being caught in the middle of Todd and your mom? What was going through your mind?
Kandi: It was extremely frustrating being caught between the two of them. I was hoping Todd would stay cool. My mom can be abrasive and she takes things to the extreme sometimes. When she gets like that talking becomes pointless. That’s when I get quiet and turn on my ignore switch, but I know everyone can’t ignore her. I’m glad Todd kept calm though.