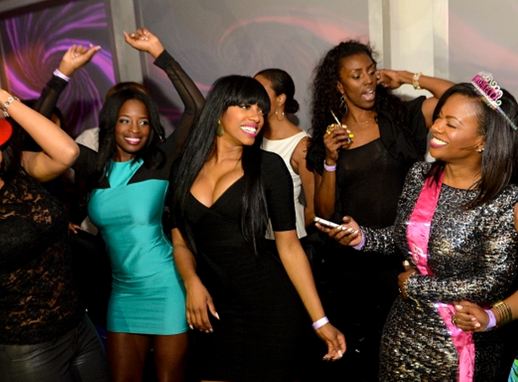 Bravotv.com: How crazy were the last two days before the wedding?
Kandi: The last few days were crazy. Even crazier when the whole pre-nup situation started to fall apart. I was really concerned about the dresses obviously, because some people hadn’t even had their fitting. Reco kept saying, “Oh, it’s going to get done,” but things still weren’t done, so that was stressful.

Bravotv.com: How close were you to your brother?
Kandi: I was extremely close to my brother. He was the best big brother in the whole wide world. When he died, that was the worst moment in my entire life. There’s no way to describe it to anyone, and it’s a hard thing to even share with people. My brother passed when I was 15, and I don’t think you’re the same anymore after you lose someone who’s that close to you. You realize anyone can go at any time.

Bravotv.com: Do you think you had a breakthrough with your mom at the graveyard?
Kandi: I don’t think that moment helped my mom be more OK with the wedding, but I definitely feel that any time she’s able to talk about my brother or talk about his death, it does make her feel better. I don’t think she was any happier about me getting married, but I was happy that she decided to walk me down the aisle. I was shocked actually.

Bravotv.com: Whose bachelor/bachelorette party do you think was wilder, yours or Todd’s?
Kandi: Todd’s bachelor party looked better on TV than mine did, but mine was the bomb. Anybody who missed it, missed out.  People were saying, “Aren’t you supposed to have men?” But I thought that was the fun, out-of-the-box part. I expected them to get male strippers, but that’s nothing new. So when Phaedra brought out her strippers, I was completely thrown off. It was more fun and funny than something to turn me on. It was about having a good time. Phaedra had the little person, the big person, and there was also an old lady, but you didn’t see that. She had people you might not have expected to be stripping, and that was what made it fun.

Todd did the typical thing, he can do that at any strip club in Atlanta. But go ahead, if that’s what floats your boat, cool. The guys seemed to have a good time.

Bravotv.com: It looked like Aunt Nora and Sharon were the party MVPs, did they keep up with everyone?
Kandi: Yes they did! We actually had another game you didn’t see where you use your first initial and then you say how you like it and where you like it. So for instance, “My name is Kandi and I like it kinky in the kitchen.” (And a shout out to Bedroom Kandi parties, because my consultant gave us all these games and was helping guide the party.) So my aunt says, “My name is Nora…and there is nowhere that I have not done it.” It was so hilarious! Everyone fell out! We had a ball.

Bravotv.com: How tense was the rehearsal?
Kandi: The rehearsal was definitely tense, because right before my attorney had told me that if we didn’t have Todd sign the pre-nup on camera, I should not get married since the pre-nup wouldn’t mean anything. Basically at that point he could have claimed he had to sign under duress unless he did it in front of a camera. In my mind I was like, “He’s not going to do that,” and when I said that, the attorneys suggested that I not move forward. So I went into the rehearsal thinking, “Am I prepared to call this wedding off?” I was just stressed about it.

Bravotv.com: Were you prepared to call off the wedding?
Kandi: I was. I got so many tweets saying I was horrible to consider it, but let me explain. Todd did not get his attorney until two days before the wedding. We did start late, it was only a week and a half before the wedding when my attorneys started drafting the pre-nup, but my attorneys wanted Todd’s attorney’s information at that point so they could work through it all together. That did not happen, but Todd and I had said we were on the same page, so I didn’t think it was a problem. The only thing at the end that I thought could be taken out was the part about what were to happen if I died, I understood why Todd and his attorney would have an issue with that. But the things that his attorney was flagging were mostly financial. That was when I had to say, “Hold on, why is your attorney talking to me as if you’re my employee? You’re not my employee, everything we do together we split equally.”

Watching it play out on the show, I felt that I looked like a villain, but at the end of the day, it’s hard to plan a pre-nup. It’s hard to plan for the worst case scenario with this person when you’re planning to spend the rest of your life with them. So no matter what you’re going to look like the bad guy, because when you’re in love, it seems harsh. But Lord forbid we fall out next year, everybody would think I was stupid for not doing it.

The whole thirty day clause, I didn’t think of that, it was something my attorney put in. I didn’t really care about it, but I have met people who have had that issue. Bethenny and I sat and talked about that. She was telling me how she’s been going through this divorce and he will not move out. So do you want someone to sit there in your face saying, “I’m not going anywhere”? Of course you want to be able to say, “We’re not getting along. We’re done with this. Goodbye!” So I get the thirty day clause, but people were sending me tweets about how horrible I am. If you’re in a relationship and you decide you’re not going to be together anymore, do you still want to see that person coming out of your room with their boxers on? No!

You’ve got to keep in mind that the things in the pre-nup are only necessary if we were to fall apart. And Lord forbid, I don’t want it to fall apart, I want our marriage to last forever. But I have to be realistic. Both of my parents have had multiple marriages. I don’t want to put them on blast, but between the two of them, it’s nine marriages, so I have to be realistic.