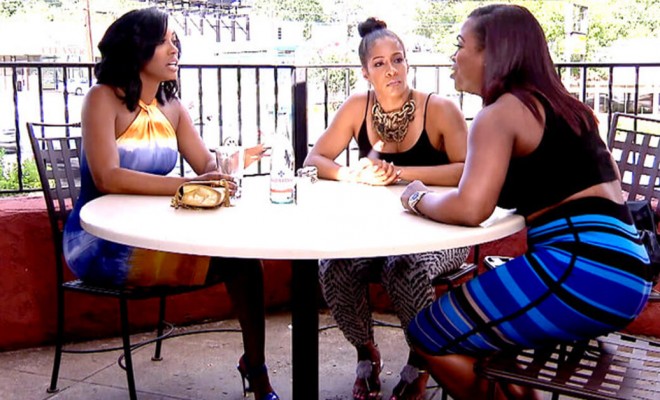 Kandi: What Phaedra Said Was Bullsh**

Bravotv.com: Were you nervous at all about going with Riley to see her dad?
Kandi Burruss: No, I wasn’t nervous. I just feel like it would be better for Riley to meet with her dad by herself so that they can really talk.

Bravotv.com: What went through your mind watching Phaedra make those accusations about you and Shamea?
KB: I was cracking up! First of all, what Phaedra said was some bullsh–, but what she did was just an example of what I was talking about. She’s been doing shady things and saying shady things behind my back for years now. That is why I really don’t mess with her like that. Although I shouldn’t have said some of the things Phaedra and I had talked about in private to anyone (I especially shouldn’t have said it on camera for the world to hear), but at least what I said was true. Phaedra is whispering made-up stories, telling them this untrue Shamea story, and her rationale is “we are close.” Girl, you’re reaching! If that’s the case, Phaedra and I used to be close. So does that mean the same goes for us, and then Porsha’s fake, hypocritical ass is going to sit there and co-sign that about her best friend (we had just watched them in a scene right before). And right after that Porsha’s telling me I’m wrong for saying something about my ex friend, but she just co-signed a story Phaedra made up about Shamea, who is her current best friend. SMH… I remember when Porsha first brought Shamea around us years ago, Shamea said something about Phaedra coming at her ex-husband inappropriately. Phaedra denied it, but Porsha didn’t have a problem with what Shamea said. Now all of a sudden because she has this alliance going with Phaedra she wants to pretend like she’s bothered by what Shamea said. Girl, bye. This is not new news to you.

Bravotv.com: Were you surprised Porsha confronted you about what you said about Phaedra?
KB: I was just surprised she was acting like she didn’t know why. As I said, she and I have had this conversation before. But now somehow it’s brand new news to her? I should’ve known that she would be fake about it. She’s the last one who can check me about friendship, considering the fact that she just dogged her own best friend while acting like Phaedra’s puppet. They are Gippetto and Pinnochio…

To read more, head on over to BravoTV.com