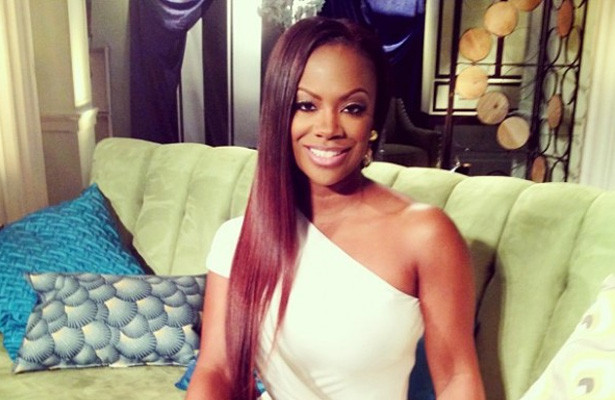 Promotion is at an all-time high for super businesswoman and star of Real Housewives of Atlanta, Kandi Burruss as she gears up for her spin-off show, ‘The Kandi Factory‘ premiering on Bravo Tuesday, April 9th. This week, we chatted with her on a media call about the new show, along with the highly buzzed about surprise break-up with RHOA’s Porsha Stewart, plus  wedding plans with fiancé Todd Tucker. Peep the excerpts below.

On why she chose to do another reality show:

I wanted to give people the opportunity to help them achieve their dream of music. After my first year on housewives and I did the song with Kim, so many people where coming up to me saying “if you can do that for her, I know you can do that for me”, so I was like it would be kinda cool and fun to do it for regular everyday people who just never had anybody to work with them. Bravo thought it was a great idea and they let me do it.

On what sets ‘The Kandi Factor’y apart from other reality music competition shows:

Our show has all original songs. All the songs were written specifically for that contestant.There are no cover tunes on our show. Most of the shows I have seen all have cover tunes. Obviously, I’m a writer and I wanted to showcase that side of it and on our show its mostly about the artist development process.

I think people totally forget about that they just want to become a star overnight, so we show you the behind the scenes of what it takes to get there. It’s kinda cool because we do all genres of music this season–everything from rock, pop, rap, R & B, some of everything. You get to see our skills and see that we can switch it up. I love for people to know that I dont like to be in a box, I dont like to stay in one lane, and I can write in style of music and I am really curious to see what people are gonna think when they hear the songs.

Celebrity appearances on the show:

Ruben Studdard stopped through to give some advice to one of our contestants which I thought was really good because he has been in the competition situation before. I haven’t seen the finished episodes so I am not sure if it made it our not, but Phaedra came by because a couple of people on our team got into a fight with each other, so she had to come mediate. I have lots of friends that came to the big showcases that they had. Cythnia (Bailey), Stevie J and Rasheeda.

If she will continue to do RHOA if The Kandi Factory is successful:

I will continue to do both if the network will allow me to.Last year, I did the whole season with the ladies and went straight into [taping] Kandi Factory, I only had a two week break. So I was taping almost whole year,  last year. I love music and its something that I love hands down so I would definitely want to continue to do both.

Her thoughts on Beyonce’s newest song ‘Bow Down’:

She can do whatever she wants to do, Beyonce is Beyonce. She is hot but I don’t know about that song. I wouldn’t have put it out as a first release from an album, but thats her thing, I love Beyonce.

If there are ever times she feels that she is above her other RHOA castmates:

I feel like with the housewives, everybody has there good days and there bad days. We’re taping for five to six months and in my mind I feel like anybody in your regular life, if you have somebody taping you for that long  you do something crazy–thats whats gonna make the show.

On a day to day basis, I think the girls are really cool and I think they all have success in their own right. I don’t think that I am necessarilty above anybody. I feel like I stay in my lane, I do what I do and they do what they do. I think all of us represent a different type of woman.

If her upcoming wedding air on Bravo:

As of now no, but we’re open, possibly.  We haven’t made plans to do it on TV. Right now our plans are to do it privately.

Her favorite part of the wedding planning process (so far):

We haven’t got to far into yet. We were talking about early next year (to get married) but my friends say were waiting too long, so we’ve pushed it up a little bit. We haven’t got too far in the wedding planning process yet.

Biggest misconceptions about the entertainment industry:

Everyone thinks that our show is scripted and that is not true. Because we are on a show together, we come to each others parties and we probably wouldn’t if we weren’t on a show together. When we get there, they dont tell us what to say. I hate when people are like “oh that was just scripted.” I didn’t know that Kenya was gonna walk through the party with booty pads.

I think a lot of people think they are gonna get rich off of their first record and that is not true. Typically a lot of artists dont really make money off of their songs. The label owns the masters and the writer owns the other rights. When you here a song on the radio, a lot of time the artist in not getting paid, its the person who wrote the song getting paid. Artists make most of their money on the road performing and touring. A lot of people dont know that they have to tour their butts off to get that money and really set themselves up.

Advice for artists and actors on sustaining longevity in the business:

In music, there is no limit to what you can do with your music with social media and the internet. If you are a music artist, I feel like you need to be performing everywhere.

I love to see when people have video clips of them performing. Think of how many people got signed from Youtube. Take advantage of the internet and social media.

I think a lot of people talk themselves out of doing something before they even try to do it. Think about how many of us have an idea and we’re like ‘I cant do that because it will probably cost to much’. But when you try to figure it out it really wasn’t as much as you thought it was.

How she feels about kid stars (like Toya and Lil Wayne’s daughter Reginae) being in the industry:

I love kid stars as long as the parents keep them level headed and make sure they keep them away from all the craziness like drugs and things like that because that is prominent in the business.

I think its cool. If my daughter wanted to pursue being in music or entertainment I defitenly would support her. I feel like you have to keep your eye on them [kid stars] and keep them grounded.

They [kids stars] did come from a privileged lifestyle. I always tell my daughter dont think because you are my daughter that you will automatically be hot. I dont work like that, you gotta earn your success.

Advice on building a brand while on a reality show:

I hate to see when women are on TV and it seems like they are just happy to be on TV. They’re not benefiting from being there. As long as I have a vehicle to promote the different things I’m working on whether its music, my product, my store, whatever then its cool for me to be here. But, I dont feel like you should put yourself out there for the world to pick apart and youre not benefiting in a way business wise that you can set yourself up after the show.

It bothers me when I see some of the ladies on different shows and there not really doing anything. They’re on TV, acting up and they dont really have anything going on. A lot of people are really excited because they are doing appearance, but the appearances are only going on for as long as your on TV. So when they decide they dont want you on the show anymore then you have nothing going on.

I feel like you should always invest in yourself. I dont like when people are on TV for nothing. It just bothers me.