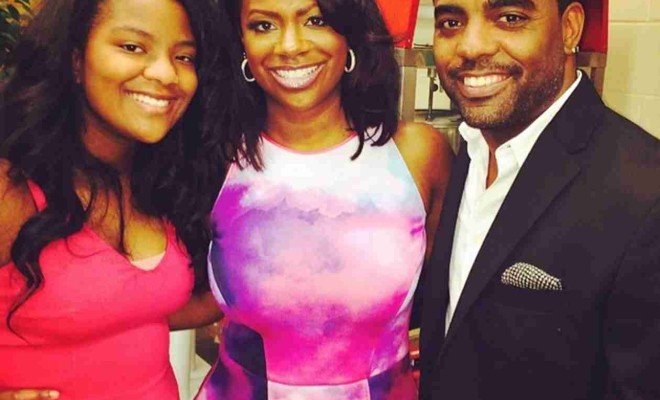 Kandi Burruss’ daughter Riley has been one of our favorite Real Housewives children from the moment we met her, and it turns out that this pre-teen takes after her uber talented mama in more ways than one. Not only is Riley a mini Kandi, but apparently this gal’s got an enviable set of pipes on her as well!

We’ve heard Riley sing a bit in the past, but mostly this stylish kido has concentrated on school work, basketball, and her friends, as she should. However, it looks like Riley, who sometimes comes across as shy on Real Housewives of Atlanta, is expanding her horizons and coming out of her shell a bit more.

On July 14 Kandi Instagrammed a photo of herself with Riley and Todd, updating us on her daughter’s latest accomplishment. “I was so proud of my baby @rileyburruss last night when she sang at the #AGIshowcase! She was scared & didn’t want to do it but she did & she sounded great! They wouldn’t let us tape. So I can’t post yet. I have to wait until the DVDs are available. #MYBabyCanSing #TheWholeFamilyCame #ProudMom,” Kandi boasted.

We’re bummed that we can’t hear Riley for ourselves just yet, but if a music superstar like Kandi is singing her praises than we have a feeling she sounds pretty darn good, even if said music superstar just so happens to be a blood relative.

Several years ago Kandi posted a video of her then-7-year-old daughter belting out Carrie Underwood’s “Jesus Take the Wheel,” and we can definitely tell that this kid had rhythm even in elementary school — imagine what she sounds like now!

Do you think Riley is destined to be a singer/songwriter like her mama? Weigh in below!