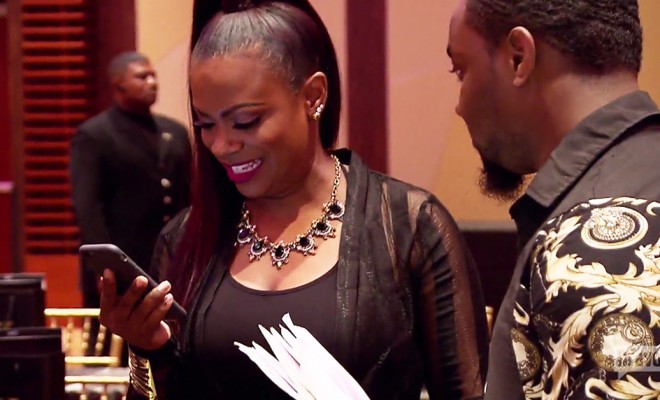 Kandi: I’m Hesitant About Helping Anyone Else

Kandi Burruss shares her thoughts on the situation with Johnnie.

Bravotv.com: What went through your mind when you saw Johnnie’s Instagram?

Kandi Burruss: I was wondering who he was talking about, because there were a lot of people in the picture, other friends of ours. I was really baffled, because we had just paid his event company to do our convention and as far as I knew we were on good terms.

Bravotv.com: Were you surprised by Johnnie’s response when you confronted him?

KB: I was extremely surprised. Why did he all of a sudden have a problem with me seven months after he no longer was a part of the team? He let it be known that he wanted to come back before, but all of a sudden he says I didn’t pay him enough and he had a problem with me. I can’t really say too much because this is an ongoing lawsuit, but I just think it’s sad when you try to help a person build their business, support them, refer them jobs, and promote their business so that they can be successful on their own, but then they try to tear you down and discredit you. It really sucks and makes me hesitant about helping anybody else.

Bravotv.com: What did you think about Johnnie’s visit to Phaedra’s office?

KB: When has she ever been excited to see somebody from the “Kandi Koated Clique” come around? Clearly she knew he was no longer with us and happy to encourage him to sue me. Her comment about the slave wages was funny to me, because she was the person I talked to when I was first trying to figure out fair payment for different positions… Side bar: I hope you all don’t believe that 80 hours a week mess. Johnnie had his own event planning business that constantly planned events. How was he with us for 80 hours and also at his events building his own business?

P.S. We have some great new same sex toys in at BedroomKandi.com, and since they say I’m such a big freak, you should know I get the best toys! Get something to spice up your life!

For more RHOA, head on over to BravoTV.com.