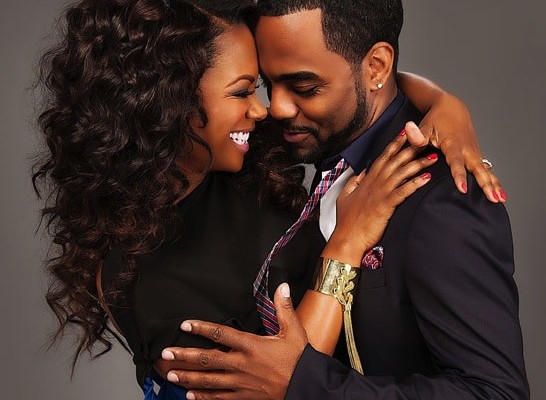 Kandi Opens Up About Her Engagement & Riley’s Relationship With Todd

ICYMI: Kandi opened up on her ‘Housewives’ blog about the day she got engaged, her stance on pre-nups & Riley’s relationship with Todd. Check it out!

Hello everyone! So much has happened since the last time I’ve blogged, I don’t even know where to begin…

Well, if you haven’t heard I’m engaged! That happened on New Years. Todd popped the question. I was shocked to find out that at the same time Gregg popped the question to NeNe! I guess love was in the air for the beginning of 2013. I am happy, excited, and curious about what the future holds for me and my family.

I have so much to think about now, so much to prepare for. I’m clueless. We don’t know if we want a destination wedding, or if we want to do it in Atlanta. Do we want a big wedding or a small intimate one? Do we even want a wedding? Should we just get married privately and do a big reception? Well, I think I’ve axed that one out already. I think we’ll do a more intimate one, but if we did it in Atlanta, that’s not going to happen. It would turn into a HUGE wedding, because I have way too many family, friends, and people in general that I know, who would be offended if they’re not invited. Hmm… this is going to be crazy. I guess I’ll have to get advice from the other ladies in our circle.

Since I’m newly engaged, I’m going to touch on a couple of things that would be related to marriage and family. First I’ll go back to my conversation with Porsha about pre-nups. I do believe in pre-nups. I know that some people feel if you are truly in love and are planning to be dedicated to your marriage that a pre-nup somehow means the person requesting the pre-nup is expecting the marriage to fail. I don’t agree. I feel like it’s a safety precaution. Just like if you have a fire extinguisher in your home it doesn’t mean you expect it to burn down, but you’re just prepared to put out the fire before it starts if need be. I’ve had friends and associates who didn’t get a pre-nup say “they didn’t need one,” “she or he would never do that,” etc. But then later when they got divorced, things got ugly, and the person tried to get everything, they were like, “I would have never thought they would have done that to me,” “she or he is not the person I married,” blah, blah, blah. I feel like people do some crazy and vindictive things when they’re hurt, so I think there should be agreements set in place while everyone is thinking clearly. That way if D-day ever comes (and hopefully it won’t, but if it does), then it doesn’t have to get uglier and more hurtful than it already is.

Moving right along, let’s go to the talk with my daughter and Todd. Riley cracked me up when she said she met him and a month later he was moving in. She was exaggerating. I dated him for a few months, introduced her to him, and a month later he was spending the night a lot. LOL! Todd didn’t move in until we moved to the new house, which probably was nine months into our relationship, six months after Riley met him. It is always a big debate as to when the right time is to introduce your child to someone. It kills me when people like Wendy Williams, who had both of her parents in her life and is now raising her child with his father her husband, dog me out saying what they think about my daughter meeting the man I’m dating. I personally feel if you’ve never been a single parent or the child of a single parent household, then don’t pass judgment. You cannot relate to my situation. I have been a single mom, and I was raised in a single parent home.

What works for me and my daughter may not work for everyone, but I will try to shed some light on how we’ve done things. My daughter and I had a long talk one day, and she told me that she wanted to meet the guys that I was considering dating when we were in the just friends phase. I said to her no that’s not cool because she doesn’t need to meet every guy I date. I didn’t want her to see different men coming around. In response she said, “Well if they are just your friend, then there’s nothing wrong with me meeting them, but I don’t want you to wait until you love them for me to meet them, because what if I don’t like them? Then you may not want to break up with him, and I’ll be unhappy.”

That took me back to when I was a kid, and I remembered my mom had a boyfriend that my brother and I hated. She really liked him, but he was so mean in our minds. She kept him around for a while but eventually dumped him because of us. Once my dad married this woman that I thought was horrible. When I was at their house she said something really mean to me one day, and I didn’t feel like my dad took up for me. When I went back home to my mom’s house, I never wanted to go back over there to my dad’s house again. Looking back on my childhood and how I felt as a kid, I totally understood where my daughter was coming from. I made a vow from the time she was born that if any man couldn’t love my daughter and treat her with love, then he would get dropped like a bad habit. I don’t feel like a kid should meet every person that their parent dates, but if it’s someone you see yourself wanting to get serious with, then why not? Meeting them doesn’t mean you’re being intimate or inappropriate in front of your kids. If you date someone for two years and you’re deeply in love and ready to get married before you introduce them to your child, but then they meet your child and you see they aren’t good with kids or they are mean or they really just don’t connect with your child, would you still marry them? I wouldn’t. So that would have been two years wasted for me.

Well everyone has to do what works for them, and this is what has worked for me and my daughter. Todd asked Riley for her blessings before he proposed to me, and she was standing right there for moral support when he popped the question. It meant everything to me that she was happy about it. I believe that Todd will be a great step-father to Riley like my step-dad Leroy Jones was to me. I wrote a song about him on my last album. If you get a chance, go to iTunes and download Leroy Jones. I describe real moments from my childhood and how he was there for me and my brother. Great men do exist!

Well, thanks to everyone who sent their well wishes for our engagement and please keep your prayers up for us!