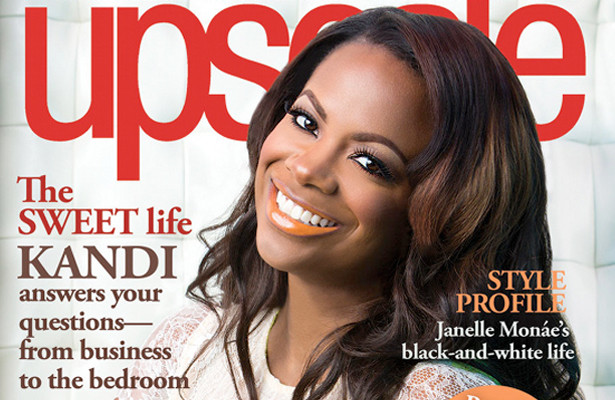 Kandi Burruss is helping to ring in Spring as she rocks a lime & white lace dress for the cover of UPSCALE magazine.  Check out what the “Real Housewives of Atlanta” star has to say about the controversy she’s stirring up around pre-nups…

Kandi knows how to bring the soft and pretty when she needs to.  The 36-year-old singer/songwriter is looking fab on the April 2013 cover of UPSCALE magazine.

And while topping off her lips with a trendy orange lip color, Kandi chatted up the mag at her Atlanta studio to give the scoop on her new Bravo television show, “The Kandi Factory”, and her relationship with fiancé Todd Tucker. She also answered advice questions from UPSCALE readers on everything from relationships and sex to money and business.  And of course, she gave her explanation about the recent controversy she caused on RHOA after her comments about why pre-nuptial agreements should be mandatory.

On her relationship with fiancé Todd: “The cool thing about Todd and I is that he’s very smart, intelligent. We have so many ideas that we’re planning to make happen together. We’re workaholics. That’s something we’ve been talking about lately, trying to find more ‘us’ time.”

On everyone making a big deal about her suggesting a prenup: “I don’t see why it’s such a huge topic of conversation. Pre-nups should be standard. Those things should be put in place when everyone is thinking clear-minded. Why would you wait until y’all fall out? People do things to hurt the other when they’re hurt. If I was a man and made that [comment about pre-nups] I don’t think people would’ve even cared, probably.”

And here’s a taste of the real talk Kandi gave to a reader in her special Advice Segment in the issue:

I’ve been casually dating this guy. He’s really nice but I’m not really feeling him like that sexually. Should I kick rocks or hope it gets better? —Bianca, Denver, CO: Kick rocks [laughs]. The reason why is because old married couples always told me that there are three things to make a relationship work: financial stability, good communication and great sex. If any one of those things break down? The whole thing is falling apart. Think about it though—if the sex ain’t good, one of y’all will get bored and cheat or just be bored and tired of them. Financial stability— and I don’t mean rich. I just mean stable— being able to maintain and do day-to-day stuff. If the person never has financial stability and they’re never able to pull it together, then you’re having financial arguments and when you have arguments and y’all fighting all the time about money, then what happens? You don’t wanna have sex and the whole thing breaks down.