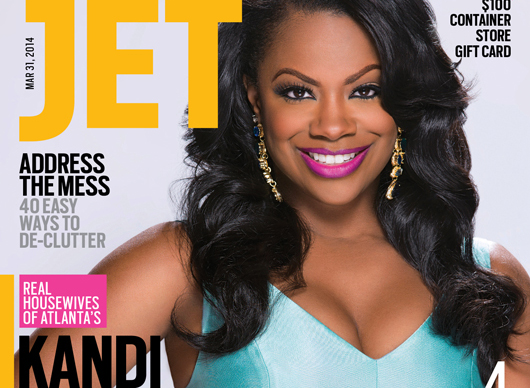 For the last five years Kandi Burruss has entered our homes as part of the cast of Bravo’s hit reality series The Real Housewives of Atlanta (RHOA). When the Atlanta-bred Grammy winner made her debut during the show’s second season in 2009, fans were not only impressed by how the former member of ’90s girl group Xscape managed to parlay her talents into a credible career as a songwriter and producer, but also by her genuine likability.

Unlike many reality stars, the 37-year-old isn’t brash and boastful about her millionaire status. Instead of highlighting how to blow a fortune, this all-grown-up girl next door proved she had two things on her mind: dollars and cents. “When I speak about anything on camera I want to accomplish it before we finish taping,” she tells JET. “I am a ‘do what I say’ person. I want people to know I’m not a bullshitter. I hate when people on reality shows mention how they want to do this and that, but you never hear of it again.”

Burruss’ recent professional feats— an Atlanta-based musical A Mother’s Love (out on DVD in April); her adult toy line, Bedroom Kandi, which has more than 900 contractors; and her Atlanta-based headquarters The Kandi Factory, which houses TV, music and artist development enterprises— have all made a lot of noise with no end in sight.

To many viewers, Burruss’ life is the epitome of the complete package: a growing empire; an 11-year-old daughter, Riley; and a fiancé, television producer Todd Tucker. A practical woman at heart, Burruss credits a calendar as the key to her balancing act.

“I put everything on it,” shares the savvy businesswoman. “Especially my daughter’s events. I block off the time when she gets out of school and her basketball games because sometimes people don’t respect the fact that you have a child.” Unfortunately, making time for her relationship with Tucker hasn’t been as simple.

TO READ THE FULL STORY, PICK UP THE LATEST ISSUE OF JET MAGAZINE, ON STANDS MONDAY, MARCH 10.