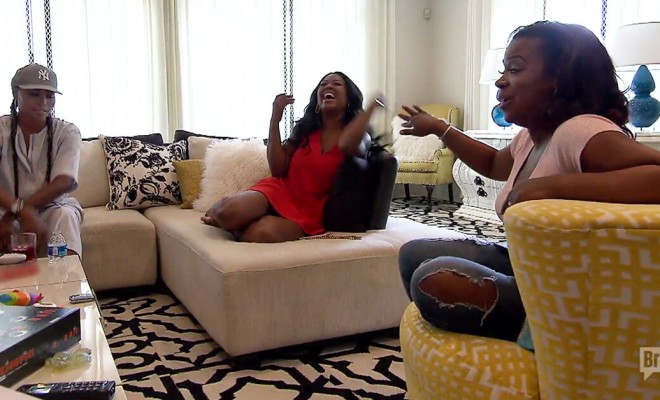 On this Sunday’s all new RHOA, Kandi Burruss receives a couple of unexpected houseguests. In this exclusive preview, Kenya Moore, Kandi Burruss and Cynthia Bailey discuss a group text they received in which Phaedra Parks asked to receive 50 percent of her pop-up shop’s proceeds.

The ladies agree that they don’t remember Parks previously saying she would get 50 percent, with Bailey pointing out that even Sheree Whitfield recalls the initial figure as being lower.

“Sheree Whitfield is a human tape recorder, OK?” Bailey tells her friends. But Burruss doesn’t agree with the assessment and fires back, “She always brings stuff back wrong. Sheree invited me to a lunch with her and Porsha. Then all of a sudden, Porsha goes, ‘Sheree was telling me how you had said that me and Block [Spencer] had sex.’ The part that I had spoke on was that they’d dated before.”

“I guess Sheree had the conversation with her again — I guess [Sheree] threw in the part of them having sex,” Burruss adds.

Suddenly, a lightbulb goes off for Moore. “Is he the one that peed on her?” she asks excitedly. Moore reminds a confused Burruss that when the ladies were in Miami and playing a round of Never Have I Ever, Williams took a drink when asked if she had ever had a “golden shower.”

Burruss wants any part of this speculation, saying, “Leave me out of the pee!”

Don’t miss an all-new Real Housewives of Atlanta, this Sunday at 8/7c on Bravo.