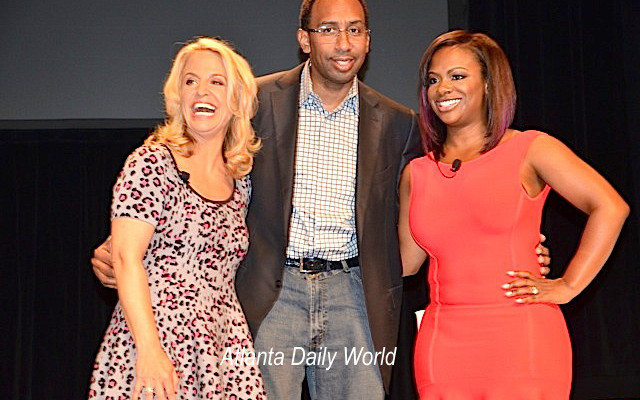 Smith, the co-host of ESPN’s popular daily debate show “First Take,” opened the seminar reiterating an apology he already made over his controversial Ray Rice domestic abuse commentary — in which he admonished women not to provoke men to strike them — that resulted in a week-long suspension from the sports network. He also made it clear to the audience that he was raised by five women and will never condone domestic violence.

Moving to the purpose of the session he then asked the ladies, “Would You Date You”? He did not know he was opening the door to candid conversations.

On the other hand, Berman said that men found her to be intimidating by her sexual being and profession. Some men are just not secure.

Berman said that men want regular sex with a woman that makes them feel needed. In response, the outspoken Smith said, “Give a man what he wants and he will learn to need you!”

The audience filled with women responded in disagreement with “aww no” and “boos.”

There was no moment where the audience was left disengaged. Wrapping up the session, the panel took questions from the audience such as how to handle an alpha woman to remaining friends with exes, old flings, and the opposite sex.

Berman believes it is not possible for heterosexuals to be friends with the opposite sex. Burruss’ perspective differed and she said that she is friends with her ex-flings and sometimes look at them like a past mistake. The session was one of the most sought after sessions during the Neighborhood Awards.

Watch an exclusive segment from the panel below.