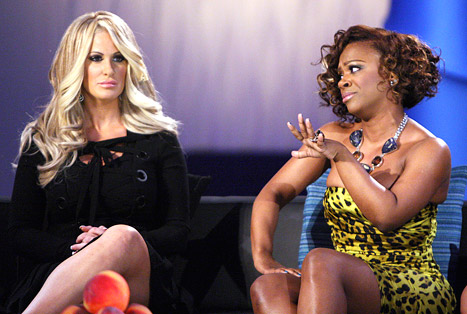 Don’t be tardy for the next court date! Kandi Burruss tells Us Weekly that her legal battle with Kim Zolciak over their 2009 song “Tardy for the Party” isn’t over yet.

On Saturday, Oct. 12, The Wrap reported that a judge at the United States District Court in the Northern District of Georgia ruled in favor of Zolciak in Burruss’ lawsuit against her former Real Housewives of Atlanta costar. But the 37-year-old singer-songwriter and record producer tells Us she’s not dropping her case yet. “Kim really didn’t win. That was just one level of it,” she explains. “Now it goes back to other levels of the court and it’s still going on.”

Burruss sued Zolciak, 35, in March for profits made from the sale of the song, claiming the track was sold “without [the] plaintiffs’ authorization, license or consent.” Zolciak responded by filing legal documents of her own, accusing Burruss of filing the lawsuit to promote her own show.

“It’s just the principal of it at this point,” the Grammy winner tells Us of the ongoing lawsuit. “It’s not about the money. I’m doing great otherwise. It’s all just silly. It’s not a big deal to me. I’ve got my daughter and my fiance and am working on new music and a Broadway show that I will star in! So it’s all good.”

Indeed, on Oct. 10 she shared on Instagram that her upcoming Atlanta-based play has a premiere date. “I’m so excited!!! My new stage play Kandi Burruss and Todd Tucker Presents: A Mother’s Love is coming to The Rialto Theatre in Atlanta November 22-24, 2013,” she wrote. “It stars Eddie Levert Shirley Murdock D. Woods Q. Parker Chandra Currelley myself and more to be announced. Everyone is going to be there so you should be also! Tickets Available October 15, 2013! Please spread the word!”

Back in September, Burruss said she was working on music for the show. “I’m creating songs for my play. I can’t wait to hear the voices of the people we casted on the songs,” she shared. “I hear so much in my head but I can’t play an instrument. So I’m singing a full out song with harmonies & all to just a click track. I’ll have a musician come play to what I wrote later but I need to put this idea down now. I love what I do! You would be amazed at what I can do with no music.”