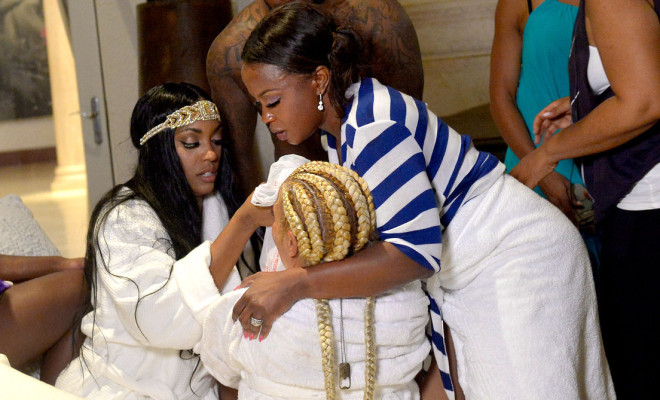 Kandi Burruss Explains What Happened After The Cameras Left In Miami

It was so much that happened that night in Miami. But to explain the home video… After Tammy was taken to the hospital & the cameras were all gone, the security locked all the doors of the house & they told us Tammy was staying at a hotel for the night & they were taking her her things.

So a group of us were sitting down stairs in the living room talking about everything that happened. All of a sudden @shereewhitfield was like Tammy’s at the door! & the guys were with Tammy so we all jumped up & ran! I guess we ran because we were told that she wasn’t suppose to come back that night. & not only was she back but she was back with the guys that had just flipped on us so we didn’t know what their intentions were.

We all ran to my room & called security. Security said they were gonna handle it & I told them we would wait in my room until Tammy & the guys were gone. Anyway, since there were no cameras I pulled out my phone & we were cracking up with each other about how silly we were to run. After a while we got a knock at my bedroom door. We opened it thinking it was security but to our surprise it was Tammy & one of the guys! How the hell they got in the house we still don’t know. The doors was suppose to be locked… Tammy was cool she just wanted her stuff but we didn’t have it so she left. Security was slipping that night tho.

Tammy was looking at us like we were crazy & we were freaking out because we thought they were coming for vengeance but all she wanted was her stuff. LMAO!!!

So I can’t post the whole video but it’s hilarious. When we got a knock on our door we thought it was security but it was Tammy! @porsha4real is hilarious.