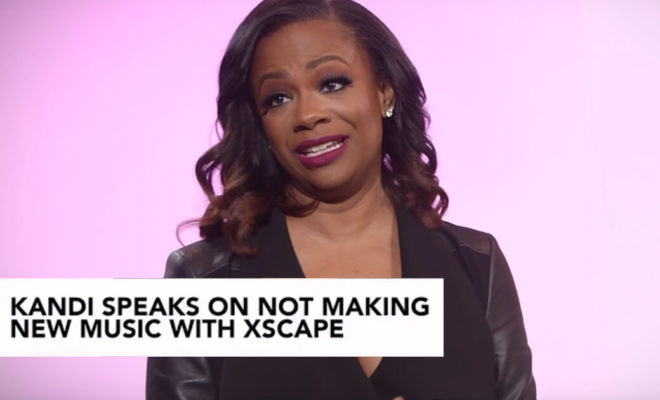 Kandi Burruss shocked fans when she announced that she will not move forward making new music with Xscape — LaTocha Scott, Tamika Scott, and Tameka “Tiny” Harris — in 2018 following their sold out reunion tour.

While she’s already shed light on the reason behind her decision, saying she had her own gigs lined up, including a run on Broadway, she hasn’t been completely candid about breaking away from the group…until now. In a new interview, Kandi revealed she needs to be in control when it comes to decision making about her career.

She also explained that decision making in Xscape was always, “majority rules,” which ended up being a “three against one” situation, with the other women agreeing on things and her being the one who had creative differences. Read her explanation in part, below, and watch her full interview.

“As soon as the girls and I started talking initially I had told them I didn’t really want to do new music and the main reason is because I feel like I don’t want to mess with our legacy. When we were a group we had three platinum albums, all of our albums were hits, we never had a flop album and things are not how they used to be back then. Records are not selling like they used to do back then.

I don’t want to put out an album and it not be on that same level… now we’re just four different women with four totally different creative ideas that i don’t fee like we see eye to eye on what the music should be creatively. And, I would hate for us not to put out something that is as good. I just kind of feel like it kind of tarnishes things. My girls, all of us, I feel like everybody can really sing their asses off; I feel like performance wise, everything was amazing. But, when people come to the show they come to see the hits that they know us for and they love us for.

That’s why I don’t feel like there’s a need to gamble on something may not be… It’s different when you’re younger, but now I’ve been doing my own thing, making my own decision for myself for so many years. so it’s like , I hate to say this but i can be a control freak.

So, to not have control over what I’m doing, and have to just do it because someone told me to do, and I don’t agree with it, then that’s the problem, like, ‘I love y’all, but I’m just not at that point in my life anymore.”

“Now, our group is majority rules; everything is a vote. Typically, they all see eye to eye, and I’m like, ‘Ok, that’s three against one. So, creatively, I just like being in control.”

But all is not lost, following their sold out Great Xscape Tour, the ladies have just announced they will be performing together on the main stage at this summer’s Essence Festival! Tickets are on sale now!