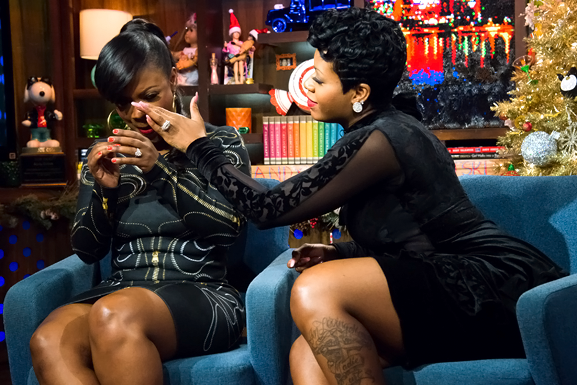 Kandi Burruss Breaks Down on ‘WWHL’

It’s been an emotional few weeks for Kandi Burruss: she’s been caught in the middle of a feud between her fiance Todd Tucker and her mother, Mama Joyce. Her mom hasn’t been quite sure about his intentions to marry her daughter and it escalated into an all-out war on last night’s episode of The Real Housewives of Atlanta.

Kandi dropped by the Watch What Happens Live after the show and many viewers wanted to know just what was going on with her mother presently. Why hasn’t Kandi laid down the law about Todd? And is Mama Joyce really afraid of Kandi’s marriage because it will risk Kandi’s financial support?

“My mother she can be fine without my help,” says Kandi, adding that she isn’t currently speaking with her mom. “But I feel like as her daughter it’s my job to make sure she’s good. She made sure I was good growing up; I’m going to make sure she’s good. I don’t care if she doesn’t like my relationship, that’s my mom.” Kandi begun to fight back tears, but managed to defend her mother’s honor. “I’m gonna make sure my mama’s good…she can have whatever she wants, because that’s my mama.”

Many have wondered how Mama Joyce came to dislike Todd in the first place—and it seems as if Wendy Williams’ opinions of Todd (she called him an opportunist) were a contributing factor. Last night, Kandi had a few choice words for the talk show host sharing her negative opinions of Todd.

“Last year, every week, Wendy was coming on saying negative things about my relationship with Todd and then my mom would come back, ‘Yeah, Wendy said…’ Every week, and I was like, I don’t care what Wendy said…let’s ask her about her past!”

At that point, guest Fantasia Barrino also chimed in: “You better preach, girl!”

What do you think about the ongoing feud with Kandi, Mama Joyce and Todd? Tell us in the comments.