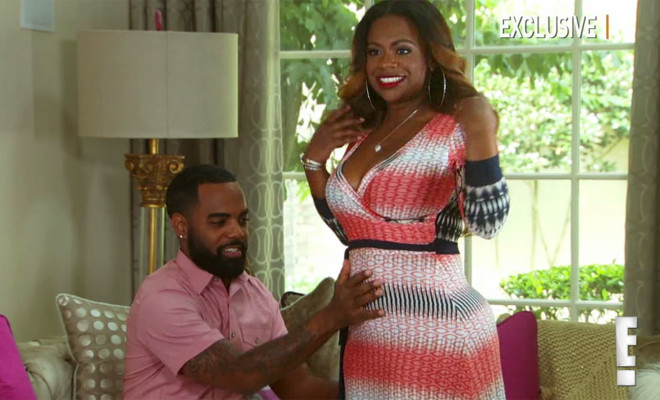 It’s A Blessing For A New Beginning

Kandi Burruss and Todd Tucker are expecting and the couple couldn’t be more excited about it!

Kandi and Todd opened up to E! News exclusively Tuesday about how her pregnancy is coming along, telling us that she hasn’t “had any cravings so far. Right now it’s been a pretty easy pregnancy.” Even though she broke the happy news to us, Kandi also explained how she and her hubby spilled the beans to her girlfriends.

Working with music groups Loud and Glamour for her re-launched record label, Kandi Koated, Kandi enlisted them to sing a song called “Heir to the Throne.”

“Basically the song was really a setup for us to come out and say, ‘Hey, we have an heir to the throne coming.'” The “heir,” she admitted, is due in January, but the couple doesn’t know yet whether it’s a boy or a girl. One thing that’s certain, however, is that they’re hoping for a mini-Todd.

“There’s too much estrogen in this house,” Kandi joked.

After going through a series of IVF treatments, hormones and “attitude problems,” the couple was finally able to conceive. Thankfully Mama Joyce was also “very supportive,” which made Todd and Kandi incredibly happy since she has had a rocky relationship with Todd.

“It’s a blessing for a new beginning,” the Real Housewives of Atlanta star said.

“Our daughters, Kaela and Riley, couldn’t be happier about becoming big sisters,” Todd told us.

Todd and Kandi tied the knot in April 2014 in a ceremony that the bride later described as the “wedding of her dreams.” The Bravo stars couldn’t be happier, and we couldn’t be happier for them. Congrats to Kandi and Todd on their growing family!