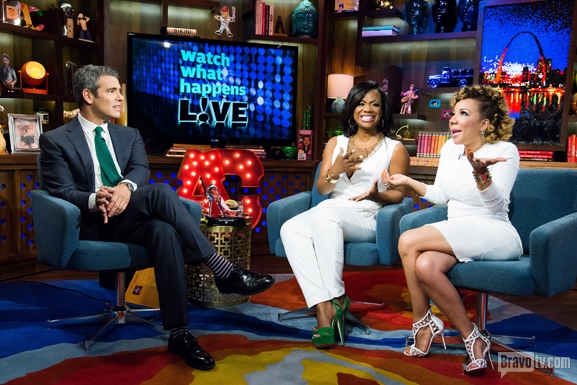 Kandi Burruss wants to make one thing very clear: there’s no way someone would call her man a b***h and live to tell about it!

Despite being one of the less dramatic women on Real Housewives of Atlanta, on a recent episode of Watch What Happens Live, Kandi admonished her co-star, Cynthia Bailey, for letting fellow housewife NeNe Leakes call Cynthia’s husband, Peter, a “b***h” in the heat of an argument.

“I just couldn’t believe that Cynthia was letting NeNe call Peter a b***h like that,” Kandi told host Andy Cohen. “She didn’t defend him at all.”

While Kandi may have thought Cynthia’s passive role in the situation was inappropriate, she did admit that the entire fight was difficult to navigate for all of the parties involved.

“He couldn’t really say anything, because then he’s going to look like a b***h,” explained Kandi. “It was a weird situation to be in, but now, Peter does get in arguments with women a lot … but she still should have stuck up for him.”

Do you think Cynthia should have done more to stand up for Peter when NeNe called him a b***h, or was avoiding a fight the smart choice?