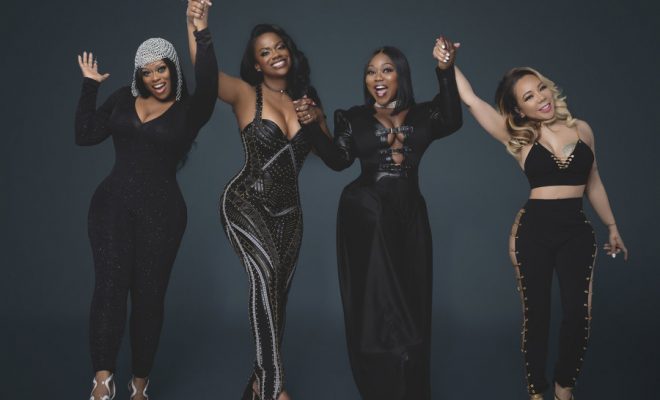 It’s been nearly two decades since Kandi Burruss, Tameka “Tiny” Cottle, LaTocha Scott and Tamika Scott shared a stage, but gathered together in a photo studio on a cloudy Monday afternoon in Atlanta, they look as if they’ve never left the scene.

At one point, it seemed only an act of God would see fans’ wishes of an XSCAPE reunion come to fruition, but it was actually word of an outside party looking to profit off of their legacy that reignited the flame. “We caught wind that somebody was doing an unauthorized movie about us and we felt it was important for us to tell our own story, instead of somebody else telling it,” Kandi tells ESSENCE.

“Tamika [Scott] and I hadn’t communicated in a long time but, when I was expressing to Tiny how I felt about our story not being told right, she relayed the message to everybody else and it turned out that we were all on the same page.”

While the ladies believe the lack of guidance in the midst of their growing pains as young women trying to navigate the music industry is what eventually caused the group to part ways, it was a long overdue conversation between Kandi and Tamika that ultimately led to them getting back on track. “When we came into the business, we were learning, our parents were learning and….we were young,” Tamika says. “So, we had to figure out a lot through trial and error.”

“The issue between Kandi and I came after the group had already broken up so, it had nothing to do with the split. Once she and I got a chance to finally sit down as women to squash any beef that we had with one another, we realized continuing our legacy was bigger and more important than any problems we went through. As adults and as businesswomen, we just put everything to the side to pick up the pieces and said we were gonna do this, do it right, do it for ourselves and for our families.”

This July, the grind will lead the group to the 2017 ESSENCE Festival stage, where they’ll perform together for the first time since reuniting. “To me, ESSENCE Festival is iconic,” Kandi adds. “When you think of it, you think of all the great acts and thousands of people coming into town to enjoy all of these artists that they love. So, I feel like it’s the perfect place for us to be able to reach fans from all over.”

Continue reading on ESSENCE.com for more details on new music and the official biopic due next year.