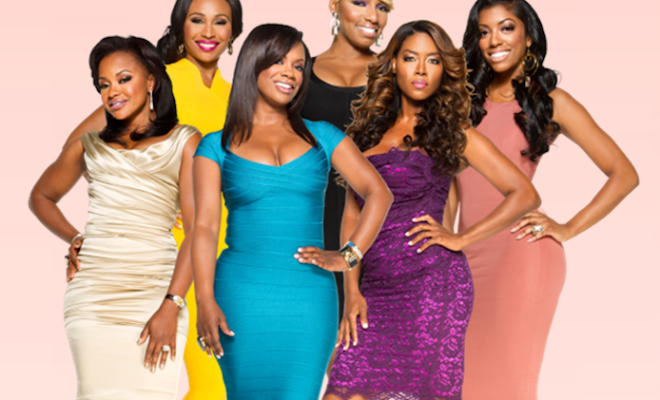 Via Yahoo Voices – Season Six of “The Real Housewives of Atlanta ” is set to premiere on Nov. 7. Based on the clip released by Bravo, as usual, the cast (NeNe Leakes, Kenya Moore, Phaedra Parks, Porsha Stewart, Kandi Burruss and Cynthia Bailey) is bringing the drama. Questions fans have had ALL summer long are being answered throughout each episode. Also, most of the ladies are transitioning (or attempting to) in their lives. Here’s what to expect:

Outings. Almost divorced Porsha Stewart opens up about her failed marriage and hints that her soon-to-be ex might be gay. For individuals who have followed Kordell’s athletic career, rumors were rampant back in the day that he was a little ‘sweet’. Of course, he always denied being attracted to men, but Porsha is re-opening the door to debates about his sexuality.

New Fights. ‘Gone with the Wind’ Kenya Moore is battling against her landlord. Their feud began in June of 2013 and was filmed for TV. Both parties get an opportunity to smear each others names. Viewers of their dispute get to determine who is the craziest.

Holy Matrimony. Newly wedded NeNe Leakes moves back to Atlanta. She and Greg are hugged up again and in love. Of course, her current state of happiness doesn’t prevent a few blowouts with other cast members.

Man Issues. Singer, writer and producer Kandi Burruss is struggling to walk down the aisle (again). She and her fiance are at odds over a few issues. Hopefully, they can work them out, so she can fulfill her dream of becoming a married woman, instead of a live-in wannabe.

Babies. Phaedra Parks gives birth to her second son Dylan. Cameras get the entire event on film. So, prepare to see her and husband Apollo in a hospital and speaking on how a second child effects marriage.

Tears. Cynthia Bailey is back to crying her eyes out. This time, she’s upset about her daughter. Details are sketchy, but apparently a parenting decision she (Cynthia) made didn’t go over so well.

Excited? Be sure to tune into season six of “The Real Housewives of Atlanta”. The cast never disappoints fans; they just keep the drama rolling for good TV.