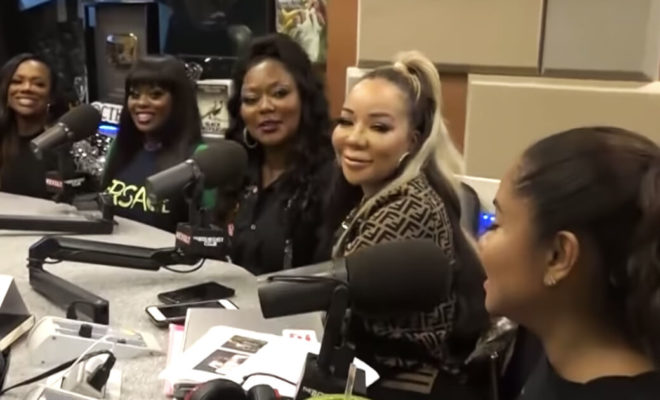 Jermaine Dupri and the ladies of Xscape stopped by The Breakfast Club to talk about their new tour, the trust issues that had with each other, their reconciliation and much, much, more. (WATCH BELOW)

The group had taken a short reprieve from four to three after Kandi Burruss, stepped away to do a stint on Broadway. But all four members, Tamika Scott, LaTocha Scott, Tameka “Tiny” Cottle, and Burruss were on hand to talk about the group’s past drama and how they repaired past hurts.

Host Angela Yee began the interview by fangirling out–saying she never thought she would sit down with all members of the group who recently reunited after almost 18 years of being apart.

“I think it’s a part of maturing, because when you’re younger you’re childish, sometimes you’re self-centered and things happen, Tamika said. But when you grow up and life changes, then you think about what’s important.”

Out of everyone, Kandi admitted that she was the hardest person to convince to return to the group, due to a shocking rumor that severed the relationship between Kandi and Tamika. In a 2007 interview, Tamika accused Kandi of sleeping with Jermaine Dupri and Dupri’s father, music executive Michael Mauldin. In 2010 Kandi later admitted she and Dupri had a sexual encounter, but denied ever sleeping with Mauldin.

“I’m one of those type of people once I get–you know I’m feeling a certain kind of way about something I’m just like “ok, I’m good. I’m done,’” Kandi said.

The group’s reconciliation. (specifically between Kandi and Tamika) and their road back to the stage, was recently profiled on the Bravo series, Still Kickin It. In the show, fans watched as the women raced to prepare for a string of up tour dates performances.

In terms of trust, Tiny had this to say.

“I think to a certain degree. I mean it depends on what it is, you know what we dealing with, we can trust one another. Some things we may go left. Everybody got they own lives going on, everybody got a lot of s**t going on,” she said.

“I look at it like a family. You know in family sometimes you fall out, you come together. Sometimes you don’t talk for a long period of time, but at the end of the day, you always come back and say, “you know what this is what’s important,” Tamika said.