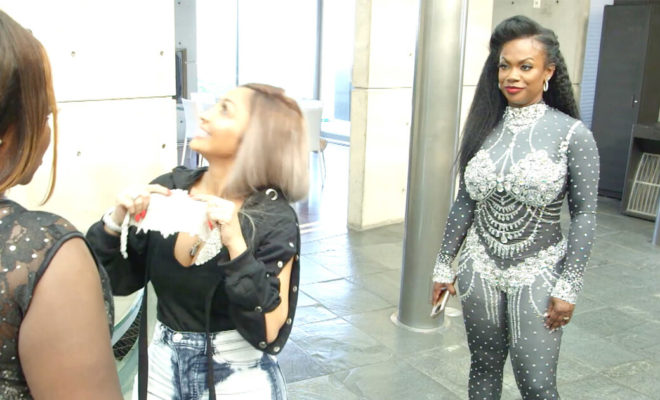 This Sunday’s episode of Xscape: Still Kickin ‘It gets tense when the group – Tiny, LaTocha, Tamika and Kandi – confront Jermaine Dupri about giving their music to an unauthorized television movie about them.

In the exclusive clip [below], Kandi states that Jermaine, who founded the group in the 90s and signed them with the label So So Def, gave away their music without telling the group he also accuses him of trying to take credit for the Xscape meeting.

For his part, Jermaine affirms that he gave away the rights to his music to “give them a kick in the a** so they’d get back to work.” Dupri says he knows them so well, he was sure that “his” plan would work which doesn’t sit well with Kandi.

In her confessional, Burruss calls BS, saying, “You did not know that, you’re just trying to credit for this reunion, Stop it! OK!” Dupri then says, “What you’re doing now, is what I knew would happen anyway.” The whole group is shocked to hear him utter those words.

Elsewhere, Tiny reveals the real reasons she needs the group’s reunion to be a success.

Meanwhile, in Los Angeles for their first performance in 18 years at The BET Awards, Kandi and Tamika have a power struggle over their new and extremely revealing wardrobe.

And as the ladies take this huge first step together on live television in front of millions of viewers, one of the husbands doesn’t show up.

Don’t miss an all-new Xscape: Still Kickin’ It this Sunday on Bravo at 9/8c.