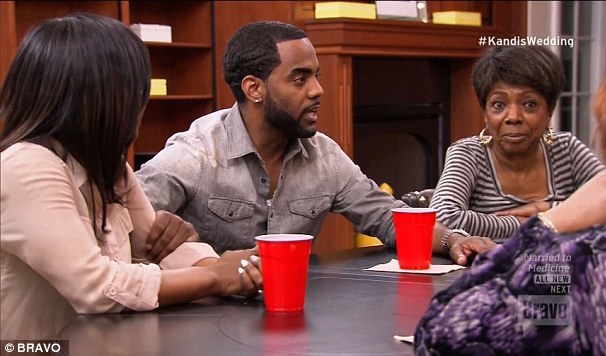 For most people, finding out that a family member is expecting is cause for celebration. For Mama Joyce, it’s cause for some serious eye-rolling.

Kandi Burruss’s mother, who has been starting feuds left and right onReal Housewives of Atlanta: Kandi’s Wedding, wasn’t feeling the love when Todd Tucker made herbelieve — albeit momentarily — that he and Kandi were expecting their first child together.

After an argument  between Todd’s mother and Mama Joyce broke out at Kandi’s home, Todd’s mother took a quick exit. Joyce then added fuel to the fire, telling the rest of Kandi’s guests, “I’m glad she got her drunk ass out of here,” to which Todd responded that his mother wasn’t drunk, just sick of Joyce’s attitude towards her son.

“I want my daughter to be happy,” Joyce explained. “I just don’t feel like Todd is the man for her to be happy with.”

With the feud between the families at an all-time high, Todd decided it was time to cut the tension with a little humor and jokingly announced that Kandi was with child. While the rest of the family seemed thrilled, Joyce proved she’s a master at mean-mugging, even with the prospect of a new grandchild on the way.

“The look on her face tells me she still wants to fight,” Kandi noted.

Todd’s joke may not have been a crowd-pleaser, but we hope Mama Joyce will lighten up a bit when there’s actually a baby on board.

Do you think Mama Joyce is being selfish about Kandi’s wedding?