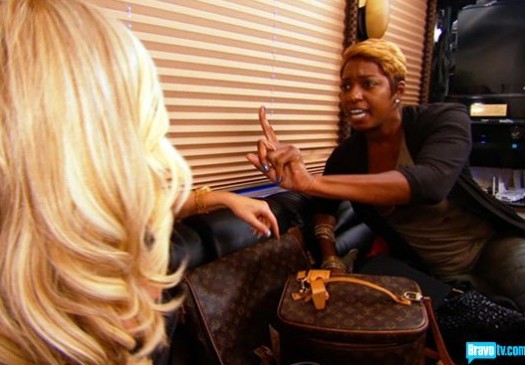 The Fight That Changed The Real Housewives Of Atlanta Forever

Life & Style has the exclusive interviews with Kim Zolciak and NeNe Leakes about their epic, racially-charged battle on the Jan. 16 episode of Real Housewives of Atlanta.

“Tardy for the Party” singer Kim invited on-again, off-again friend NeNe on her tour bus, but instead of the two Housewives catching up on the latest gossip, all hell broke loose when NeNe accused Kim of treating Kim’s assistant, Sweetie, like a “slave” — NeNe’s word, not Kim’s. When Kim yelled back at NeNe, “F—you, bitch,” NeNe erupted and lunged at Kim.

“I’d never put my hands on somebody like that,” Kim, who’s currently five months pregnant, tells Life & Style. “NeNe just snapped.” Luckily, Kim’s entourage was able to restrain NeNe, who shockingly accused Kim of being a racist. But while no blood was shed, both women have suffered severe emotional scars that will stay with them forever.

“I wish I had followed my heart and not gotten on the bus,” says NeNe to Life & Style. “I will never talk to Kim again. Never. I want nothing to do with her.” The feeling is mutual, says Kim: “I don’t need to be in a position where I am fearful.”

For the complete interviews with Nene and Kim, pick up the new issue of Life & Style. On newsstands now!

Relive the full bus fight below! The Real Housewives of Atlanta premiere with an all-new season Sunday, November 3rd at 8/7c.