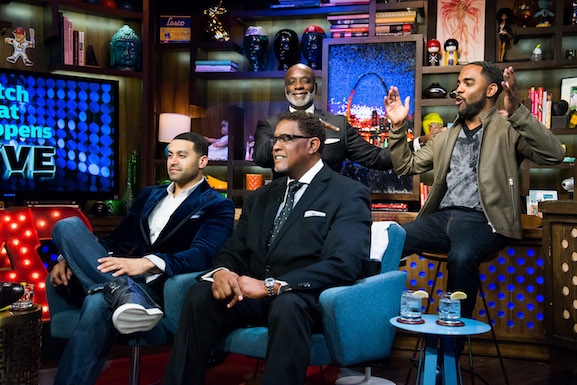 The ladies of The Real Housewives of Atlanta aren’t the only ones bringing a ton of laughs (and drama) to the ATL. Today, their hubbies took the rare opportunity to talk about their experiences on the show.

When Gregg Leakes, Peter Thomas and Apollo Nida stopped by Bethenny, all things RHOA were laid out in the open, from their sex lives to whether or not a strip club is the wrong place to be at anytime.

The best part of their sit-down? The guys came to the defense of Kandi Burruss’ fiancé Todd Tucker, who’s in the midst of ongoing drama with Mama Joyce over their engagement.

“I think he’s a good guy,” Apollo said, when asked about Todd and Kandi’s relationship. “I think he’s cool, down to earth. I don’t think he’s an opportunist. I feel bad, you hear a lot of mother-in-law horror stories…he’s going through it.”

Peter backed him up by saying Todd’s mother-in-law to-be isn’t the easiest to get along with. “Mama Joyce is a tough nut to crack!” he said.

Later, the conversation turned to “bro code” among the ATL men. And it turns out they would never snitch on one another. “I would never go back and tell my wife if I see any of these guys doing anything!” Peter said. The guys clarified a few things: strip clubs aren’t a problem in any way, especially as Phaedra has represented some of the best adult entertainers in Atlanta and Gregg used to visit NeNe Leakes while she was working in one.

“That’s like our office!” said Peter. “Guys go and meet in strip clubs. We don’t go and pick up girls. That’s just the environment we like to be in.”

Get more RHOA over at BravoTV.com.