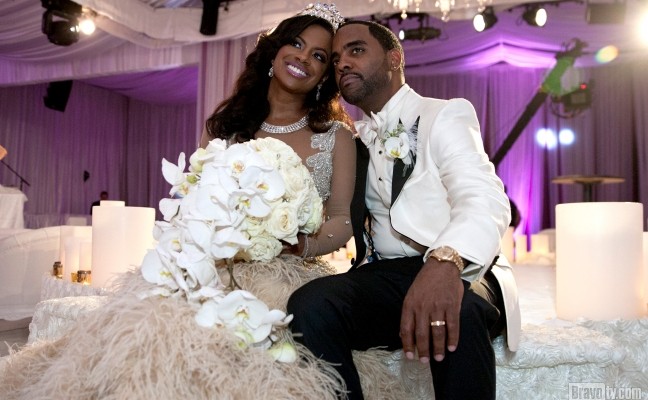 On Sunday, Bravo will debut “Real Housewives of Atlanta: Kandi’s Wedding,” its series following Kandi Burruss’ path to her wedding, which took place in April.

“At first I didn’t want to do it, to be honest with you,” she told TheWrap. “And we thought about it back and forth, back and forth … the whole thing behind that was we were focused on whether Todd and I were going to even make it to the alter … And it would be like cheating if we didn’t show the wedding to everyone, you know? I so much so wanted to do my wedding during the spring, because I knew ‘Housewives’ wasn’t taping. So, anyway we just changed our minds.”

TheWrap: There were a lot of reports about who did and who didn’t come to your wedding. Did you invite all the ladies? Or did some of them blow off your wedding?
I mean obviously you’re going to see everything on the show. But as far as everyone being invited, I invited everyone. Not everyone could make it, like NeNe [Leakes] was on ‘Dancing With the Stars.’ And Kenya was doing the other ‘Celebrity Apprentice’ show. So, it’s not like they couldn’t come because they didn’t want to. I think they didn’t come because they just couldn’t make it. Like NeNe actually sent me a really nice gift, she called and reached out.

So, for the record you didn’t feel slighted by any of your castmates?
Nah. And to be honest since it was such a big day for me, I couldn’t take time to care if any of my outside castmates were going to show up. (laughs) The only one that really mattered was Phaedra [Parks], because she was one of my bridesmaids.

I know you and former castmate Kim Zolciak have your history over “Don’t Be Tardy for the Party,” but are there still any hard feelings between you and her? Did you invite her to your wedding?
No, I don’t think Kim is thinking about me and I’m not thinking about her. We haven’t talked to each other in forever. Like I can’t even remember the last time I saw Kim, to be honest with you.

Your then fiancé, Todd Tucker, will get a lot more airtime during the spinoff. What do you think we’ll learn about him?
Well, I think there will be a lot of things you will learn. You get to see people differently when they are around their friends and around their family. People don’t realize how strong a relationship he has with his mother. And now you’ll get a chance to see a little bit of that and also his closest friends that come to town and his whole personality and his way of thinking.

On the reunion, we met a slimmer, very confident version of your mother, Mama Joyce. Does she really come into her own on this series?
Um no, not to me. I think I feel like my mom can be like that all the time. So, what people get a chance to see on TV is what I get a chance to see all the time. Sometimes my mother can be very over the top, sometimes she can be very fun, and sometimes she can be very mean. So, it just depends on what mood you catch her in.

During the show and around me, obviously, and offset she was still mad at me because she didn’t want me to go through with the wedding. And she didn’t want to push too hard, because she feels if she tells me not to do something it makes me want to do it even more. So, she was trying to hold her opinion to herself.

On the first episode, you and Todd joke about who is paying for the wedding. Can you clarify where you landed on that? Did you foot the wedding bill or did you split it?
I mean we split it to a certain extent. I mean, of course, as a woman, I do believe that most of the wedding stuff comes from the woman’s side of the family. So, there are areas where I put a little more money than he did.

Bravo has been teasing some conflict with Todd over the pre-nuptial agreement. How much conflict does the pre-nup become this season?
Oh, it became a major conflict, I thought everything was going to be smooth at first, but it turned into a lot of drama and it almost shut the whole wedding down, really.

Do you think people are going to start saying “Oh, Mama Joyce was right? He wants her money?” Can you defend Todd ahead of what we see?
I don’t think I can defend Todd, because once that whole subject of him not wanting to sign the pre-nup comes up there’s no way to defend it. Everyone will have an opinion once the episode airs. So now everyone is going to say, “Oh, Mama Joyce was right,” I’m already prepared for it. But at the end of the day, we did do the pre-nup. I personally feel like you got your friends, you got your attorneys and different people. At first he and I were on the same page, but then when you get other people in your ear you just never know what is going to happen.