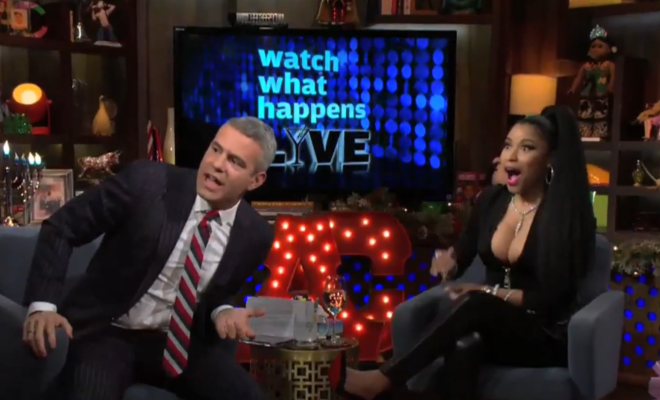 “Super Bass” bombshell Nicki Minaj is a huge fan of many things: ferocious beats, mile-a-minute rhymes, eye-catching wigs—and The Real Housewives of Atlanta’s Phaedra Parks. An avid watcher of the show, Nicki tunes in primarily to witness Phaedra’s Southern Belle tendencies in action and she admits that it’s starting to work its way into Nicki’s music.

“She inspires so many lyrics!” Nicki gushed to the Rickey Smiley Morning Show. “The fact that she inspired that ‘Fix it, Jesus’ lyric—do you understand how obsessed I am with her? It doesn’t get better than that. She had me and my girlfriends, like, we talk about her the whole hour…We’ll sit there and drink and just talk about how Phaedra be shading people and don’t not one F be given, and she don’t even raise her voice, honey. She don’t even have to move, but she will read you down.”

So on December 17, Nicki appeared on Watch What Happens Live and was shocked when Phaedra Parks made a surprise drop-in. Watch her amazing reaction to their meeting below.