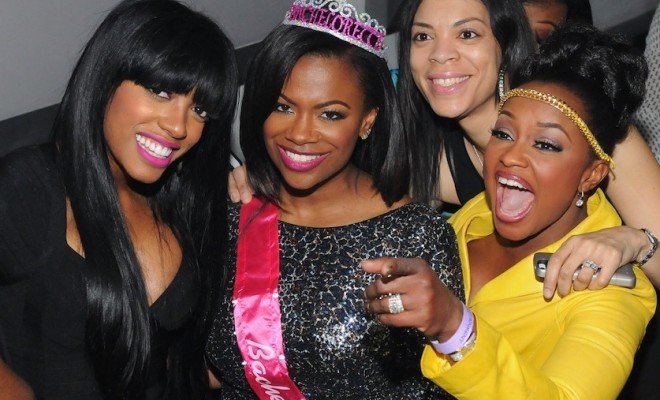 Kandi Burruss may now be a happily married woman, but RadarOnline.com is exclusively reporting that The Real Housewives of Atlanta star celebrated a wild and fun bachelorette party on March 29, 2014 prior to tying the know with Todd Tucker.

Radar got the chance to catch up with the hostess of Burruss’ bachelorette party, her RHOA costar Phaedra Parks, and got all the inside scoop on the night’s festivities.

“The party was a two-part party and we had our entertainment and our fun and games,” Parks told Radar. “A lot of the games were centered around Kandi’s product line, ‘Bedroom Kandi,’ so there were some very risqué games.”

“They played some funny games with panties: trying on panties and getting out of panties,” Parks said. “It was how fast you can get out of them. Everyone played that game. It was hilarious.”

Another game gaged the size of each partygoer’s mouth.

“It was a bunch of games of ‘How big is your mouth?’” Parks said.

Burruss also had some special entertainment in the form of female strippers.

“They wanted to do something different, so I found a lot of fun, fetish ladies who really embodied the wild side of every woman,” Parks said. “They didn’t want guys; they wanted just very interesting ladies. So we had a little person and we had a very big person.”

And the dancers made sure to put on a show.

“We had a mishap with one of our tables that one of our little dancers was dancing on it,” Parks said. “She fell. The table actually broke during the routine.”

Parks even give Burruss some dollar bills for the strippers.

One dancer even put on a sexy show using dairy products.

“It was hilarious because one of the dancers — the plus size lady — danced in a tub of blue milk,” Parks said. “That was quite a hit.”

While most women might be embarrassed by such performances, Parks said that Burruss loved the evening.

“I think it’s quite hard to shock Kandi,” she said. “She is an entrepreneur who has a sex toy line and she’s not easily embarrassed.”

Guests were treated to an open bar and a wide selection of hors d’oeuvres including “shrimp, sliders, a salmon pate, a garden salad, and a radicchio leaf with goat cheese,” Parks said. “They were great hors d’oeuvres.”

After the first part of the party ended, a smaller group of about 10 people headed to Compound, a hot club in Atlanta.

“We had a private area there and bottle service,” Parks said. “I think Kandi may have even enjoyed a glass of champagne there.”

“She said that was the most fun she had ever had,” Parks said. “I have never seen Kandi so happy in my whole life.”

And while Burruss got a ton of special presents, her guests also received special gift bags filled “with a lot of her exotic toys and products and lubricants and all of those wonderful things you hopefully might not need,” Parks said.

Burruss’ bachelorette party will air as a special episode on June 22 in her Bravo spin-off series, Kandi’s Wedding.

What do you think of Phaedra Parks’ description of Kandi Burruss’ bachelorette party? Feel free to share your opinion in the comments section below!