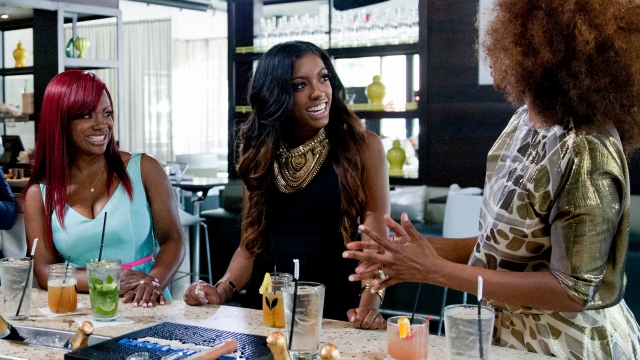 New Beginnings For The Real Housewives of Atlanta

It’s Season 6 of Bravo’s hit docuseries The Real Housewives of Atlanta, and these Georgia peaches are far from running out of juice. “We give you everything a great show should: excitement, drama, fighting, feuding and gossiping,” says cast member Phaedra Parks. This year in particular promises to offer an embarrassment of riches, according to Phaedra. “As a group, there’s always some contention among us. But this year, unlike any other, each lady is also dealing with her own personal things.”

True that. On Sunday’s premiere (8/7c), we’ll find Porsha Stewart still reeling from her husband Kordell’s decision to leave her — which she learned about via Twitter, no less. Of course, she won’t be licking her wounds for long. “Oh, honey, she gets out there in the single life!” reports Phaedra.

On the other end of the spectrum, NeNe Leakes — fresh from her Bravo spin-off I Dream of NeNe — is a newlywed once more, having remarried ex-husband Gregg in June. Kandi Burruss, who is herself recently engaged, will face questions about her fiancé’s true intentions. (One major doubter is her mother: “Mama Joyce is definitely on the loose!” warns Phaedra.) Kenya Moore lands in dire financial straits (“I was subpoenaed as a witness for her eviction process,” Phaedra says), as does Cynthia Bailey, whose overreaching hubby has once again put them in the red.

For her part, Phaedra — now mother to a second child — will attempt to pull off a mighty juggling act. “I have two babies, I’m in school full-time, I’m working two jobs and we’re remodeling our house. It’s a lot,” she says. “My belief is that a woman can have it all, but you’ll see the struggle. Every day is not Christmas.”

Maybe not, but how these ladies cope with life’s ups and downs is the gift that keeps on giving. “We have our Southern savoir faire,” acknowledges Phaedra. “Plus a few elements of the WWE and a telenovela.”