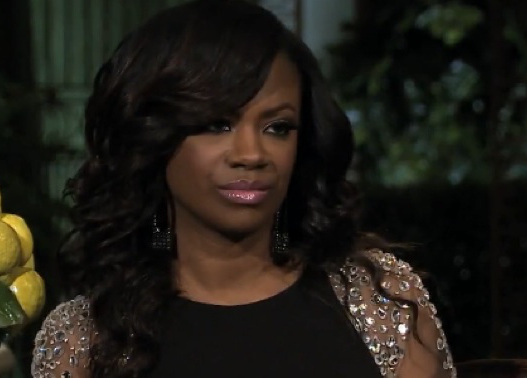 Kandi Burruss said her bridal bliss was nearly shattered because of Mama Joyce’s bad attitude on her wedding day.

When the “Real Housewives of Atlanta” newlyweds and Mama Joyce dropped by “The View” this week, Kandi made sure to plant herself firmly between them on the couch! But that may not have been necessary because Mama Joyce was on her best behavior during the show as the trio promoted Kandi’s upcoming spin-off, “Kandi’s Wedding.

Co-host Sherri Shepherd was hoping that the shift in her demeanor was a good sign for her relationship with Todd. This season on “Real Housewives of Atlanta” Mama Joyce clearly couldn’t stand him, so Sherri asked whether her opinion of him has changed since the wedding.

The mother of the “RHOA” bride wasn’t terribly excited on Kandi’s wedding day, and it showed in pictures from the ceremony! In nearly every shot, Mama Joyce barely cracked a smile. “I didn’t realize those pictures were going to get out,” she explained with a laugh.

Kandi pointed out, “She did that in almost every picture!”

Kandi was a bit nervous before jumping the broom with Todd last month. She wasn’t suffering from any pre-wedding jitters, she simply didn’t know what to expect from her mother.

“I didn’t think that she was going to say anything, but I wanted her attitude to get better. She kind of put a damper on my mood,” Kandi said.

While it was kind of hard to catch Mama Joyce with a smile on her fast at the wedding, she had the guests cracking up as she gave Kandi away.