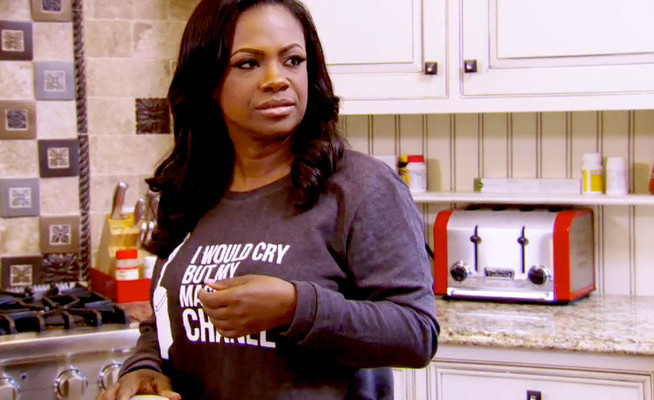 Bravotv.com: What was going through your mind when you heard you would have to cancel the tour?
Kandi Burruss: When I was told that we had to cancel the tour, I was devastated. Of course it was a dream of mine to take the show on the road and I wanted to see that happen, but that wasn’t the main reason that I was devastated. What tore me up inside was the fact that there were a lot of people that were going to lose a job because of this. We were supposed to be on the road for about three or four months. People had turned down other opportunities and some people had quit their jobs to be a part of this show. I always love being able to employ people, bring positive exposure to other artists, and help put money in people’s pockets. I want people to feel secure that when they team up with me it will be a great experience and a lucrative one. Sadly, it didn’t work out that way on this project. I had to tell my cast and crew that the show was being cancelled. I saw a grown man cry in front of me, because he was depending on this to get his home out of foreclosure. One girl threw up because she was so upset that she quit her job for the opportunity to be in this show. I was sick, because there was nothing I could do to save the show. Todd and I promoted the very first play that we did here in Atlanta, which you saw on the finale of Season 6. It was successful, but we didn’t want to do the whole tour because we didn’t have the experience to promote the whole tour. That’s why we signed with a promoter to do it, but unfortunately that didn’t work out for the best. I hate when I give up control of stuff, because it never works out how it should…

Bravotv.com: Were you disappointed with your team’s reaction to the news?
KB: Sometimes my team thinks things are funny when they are not…

Bravotv.com: Did you agree with Phaedra’s mom that Phaedra should move out?
KB: The situation between Phaedra and Apollo had become very tense. I would never suggest she be in a situation that she didn’t feel safe. Maybe they should have gone to counseling together.