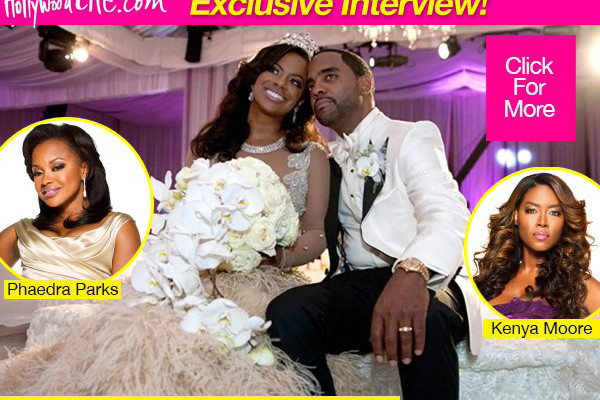 Kandi Burruss is getting married! In the season finale of ‘Kandi’s Wedding’ on Bravo, the ‘RHOA’ reality star ties the knot with her hubby Todd Tucker. Kandi told HollywoodLife.com all about her nuptials — did drama ruin her big day?

Kandi Burruss stayed out of The Real Housewives of Atlanta drama for the most part, but did she invite the ladies to her wedding? The final episode of Kandi’s spinoff brings cameras behind her marriage and it is quite the party! Keep reading to see which housewife was Kandi’s bridesmaid, and did the mother of the bride, Momma Joyce, behave? Plus, is there a baby on the way?!

Kandi Burruss married Todd Tucker back on April 4, 2014, and Bravo is bringing you behind the scenes of her big day on Kandi’s Wedding two-hour season finale event.

Kandi stopped by HollywoodLife.com‘s New York City offices to give us a sneak peek and let’s just say, it’s a good thing she wasn’t a bridezilla because there was plenty of drama to go around at her wedding! (The bridal party almost didn’t have their dresses in time!)

“Of course, you’re going to have your typical mama drama on my show,” Kandi tells HollywoodLife.com EXCLUSIVELY. “Me and my mother had an issue even before we got to the wedding when we were just at the hotel getting ready…she always thinks she’s right.”

As if Momma Joyce didn’t bring enough drama, there’s also an issue between her and Todd. “You’ll see how the whole prenup situation came together,” Kandi teases. Spoiler alert: he refuses to sign the prenup, they get into a huge fight and Kandi attends her rehearsal dinner alone, while Todd is with his friends, having second thoughts about getting married altogether!

Baby On The Way For Kandi & Todd?

Now, we all know that Kandi and Todd work things out and they end up tying the knot, and Kandi confirms to us that the newlyweds are better than ever. “Todd and I are great!” They’re so happy that they are even trying for kids.

“We would love to have a child together or maybe two,” Kandi reveals to HollywoodLife.com “That’s something that we would like to have happen, but hasn’t happened yet. So, I’m not sure how long we’re gonna keep trying before we actually say, ‘Hey, can ya’ll go put it in there?!’”

Kandi and Todd both have children from past relationships — Kandi’s daughter, Riley, was born in 2002 and Todd’s daughter Kaela (who Momma Joyce purposely ignores in the wedding episode, starting a fight with Kandi) just turned 18.

We love that Kandi is so honest with the difficulty of starting a family, and we hope that they expand their family with babies together — they would be adorable!

Phaedra Parks Was In Kandi’s Wedding — How About The Other Housewives?

“I’m not surprised,” Kandi tells HollywoodLife.com. “Overall, I want a successful show.” The girl fight-fueled drama boosted Season 6 to the best ratings ever for the franchise.

We’re sure that Season 7 will bring on the drama (Kandi hasn’t talked to Kenya since the reunion), but the wedding finale will be a blast. “The wedding itself it was amazing,” Kandi says. “It’s over-the-top…the reception was the bomb. Everything came together!”

HollywoodLifers, are you excited to watch Kandi tie the knot? Let us know if you’re happy the she is returning to Season 7 of RHOA with all of the other ladies!