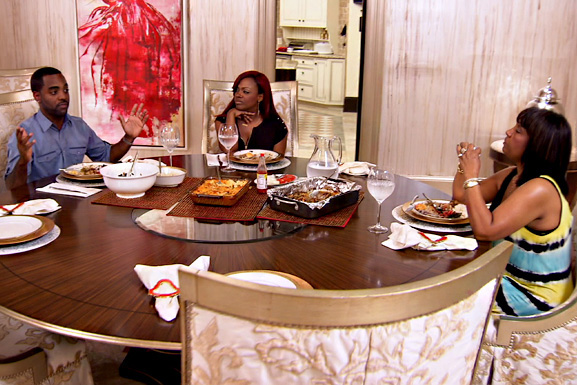 Kandi Burruss has seen and been through a lot since hooking up her fiancé Todd Tucker. Even her mother, Mama Joyce, has weighed in for better or worse on the relationship between the pair.

In an interview with Jet magazine, the “Real Housewives of Atlanta” star, who graces the cover of the magazine’s latest issue, opens up on her upcoming marriage to Tucker as well as her successful career and relationship with Mama Joyce.

Speaking of which, the matriarch revealed exactly what it would take for her to give the green light of approval for Kandi and Todd. “I pray that I am wrong. If they are married and it lasts I will be the first to apologize,” she told the publication.

As for Kandi, the following are her thoughts to Jet…

On why her mom disapproves of Todd:

“When my mother was younger it was all about getting a man to be a provider. She leans toward a man who is financially more well-off than the dude who is just a good guy.” She added, “I’ve dated guys who are more successful than me, and my mom is like, no matter what he does wrong, you have to work it out.”

On how Todd has helped her become a better businesswoman:

“I love that Todd is affectionate and relationship-oriented. But he’s also a leader and a planner, and because of his production background he makes me a better businesswoman.”

On her work ethic:

“When I speak about anything on camera I want to accomplish it before we finish taping. I am a ‘do what I say’ person. I want people to know I’m not a [phony]. I hate when people on reality shows mention how they want to do this and that, but you never hear of it again,” she added.

On when she and Todd are getting married:

“We are moving forward,” she reveals about her pending nuptials. “I have a date, but I’m not saying.”

The new issue of Jet, featuring Kandi Burruss, is available now on newsstands.