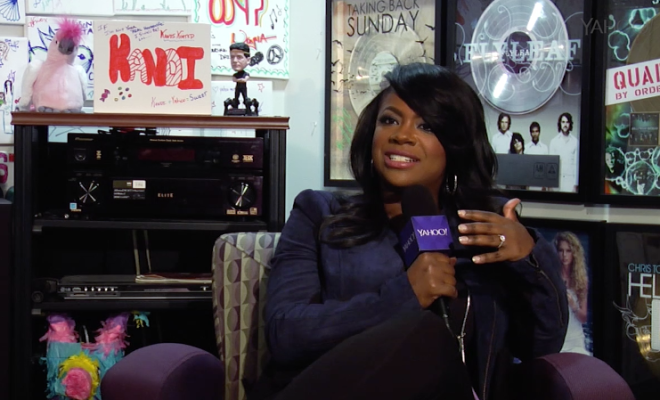 Real Housewives of Atlanta star Kandi Burruss promised herself that she would focus more on music this year. Although she is mostly recognized today for her reality TV persona, she has an impressive music discography, both as a recording artist and songwriter, having co-written TLC’s “No Scrubs,” Pink’s debut “There You Go,” and Destiny’s Child’s “Bills, Bills, Bills” and “Bug A Boo.”

Kandi says that Beyoncé’s former R&B girl group initially did not like “Bug A Boo,” a dis to annoying male admirers. “When we first played the track ‘Bug A Boo’ to Destiny’s Child, I remember, they were kinda looking like, ‘Eh, I don’t know about this,’” Kandi tells Yahoo Music. “If you can remember what the track is like, it was like really fast. At the time people weren’t really singing over those types of tracks. You’d look at it as something they’d rap over.”

In particular, Kandi remembers Beyoncé calling an impromptu executive huddle with the other members, Kelly Rowland, LeToya Luckett, and LaTavia Roberson. “I remember Beyoncé was telling the rest of the girls, ‘Y’all, if we really don’t like this, maybe we should let him know.’ Because [the producer] She’sphere had stepped out the room,” she says.

Quick on her feet, Kandi interjected in attempt to salvage the song. “I was like, ‘Well, if you don’t mind I could kinda like sing you the idea I was thinking, before you [decide],’” Kandi recalls. “They were like, ‘OK.’ At the time I think I only had like a verse and the hook kinda together. It wasn’t all the way together. It was just like a little bit of where I thought it could go. And they were like, ‘OK.’ And then we finished it together.”

Kandi, of course, is glad she followed her instincts. The song from Destiny’s Child’s sophomore album, The Writing’s on the Wall, reached the top 40. “So, it’s funny because had I not spoken up and said, ‘Hey,’ then that song would never exist,” she says.

Kandi also spoke to Yahoo Music about writing hits for TLC and Pink and said she enjoyed working behind the scenes as much as she likes being a recording artist. She started her career in music as a member of the teen girl group Xscape, who released a series of successful albums in the 1990s.

Ironically, the spelling of Xscape’s name was used for the title of Michael Jackson’s most recent posthumous album released last year, a creative decision she admits she does not comprehend. “I love Michael Jackson,” Kandi says, “but I was just curious to know why did you use our name?” She joked that when people search for “Xscape,” she wants the results to direct them to info about her former group, not a Jackson album.

Kandi’s candid disposition has made her a popular cast member of the hit Bravo Real Housewives of Atlanta series. She doesn’t mind that some of her TV fans aren’t as familiar with her music credentials. “It’s just another reinvention of myself,” she says. “I have fans for different things.”

One negative aspect of being in the limelight is the criticism that comes from people online, especially those directed towards her mother, Joyce Jones, who is also featured on the show. “Social media can be mean,” she says. “It’s been especially crazy for the last month or two.”

In December, Kandi’s mother-in-law, Sharon Tucker, died after suffering a stroke. On the show, Tucker, and her son Todd, Kandi’s husband, feud with Kandi’s mother. Some viewers have made disparaging comments about Jones, including, “‘I wish your mother was the one who died,’” Kandi says. “Who says stuff like that?” In those instances, she exercises her right to block followers.