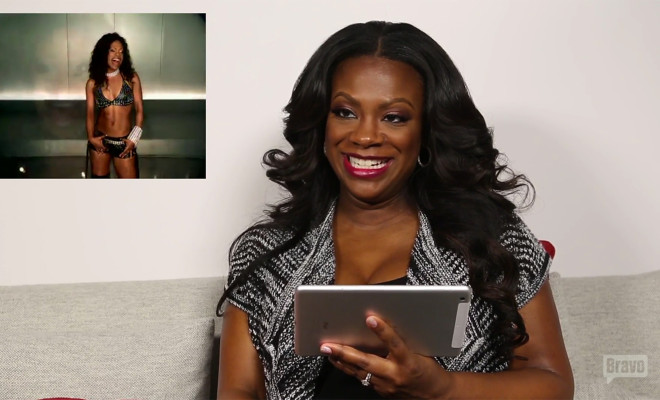 Let’s take it back to the year 2000. The new millenium was just underway, and Kandi Burruss had recently launched her solo career following an impressive run in Xscape. To kick things off, she released her sassy and uptempo anthem, “Don’t Think I’m Not.”

Written and produced by Kandi, the tune is a girl empowerment ode about playing the players, with a music video that follows the Real Housewives of Atlanta singer/songwriter hanging with her video boyfriend in a posh pad before hitting up the club. Let’s also not forget, there are also a lot of crop and bikini tops.

But what many people don’t realize when they are watching the video is that Kandi is keeping a bit of a secret throughout the clip.

“The first thing i have to say I wish I can get this body back. I used to have abs of steel back then,” she told The Daily Dish. “The big secret on this video is if you watch the whole video you will notice that one of my legs stay straight through the whole video. And that was because I was hit by a car the day before the video.”

Kandi then explained how the accident all went down. “I was getting my nails done for the video, jumped out the car, the valet guy, instead of going up the hill, he hit the car in neutral. And I was walking behind the car and my leg got pinned between two cars,” she recalled. “So there was a big hole in my leg and they had to stitch it up… We did all these things to camouflage it, which is crazy. And I was so upset because I had learned the whole damn routine. I thought I was going to break it down; and I couldn’t.”

The takeaway? “I will work through anything — even getting hit by a car,” she noted. Clearly. – Reporting by Andrew Hermann