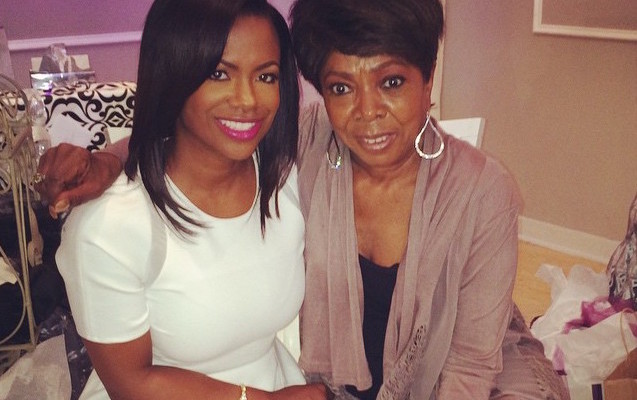 It hasn’t been long since Kandi Burruss and her husband Todd Tucker said their final farewell to Todd’s mother, Mama Sharon, during her recent home going service and while the couple is still grieving the loss of their loved one they still have plenty of great memories to cherish.

As for Kandi, any moment spent with Mama Sharon was worth remembering, even the not so sweet moments, and “Real Housewives of Atlanta” star offered up a heartfelt message about her mother-in-law after Mama Sharon made an appearance on the most recent episode.

Fans watched on episode six when Miss Sharon came to visit a newly married Todd and Kandi and finally spoke out against the way she had been treated by Kandi’s mother, Mama Joyce. While the heated exchanged may have been uncomfortable to endure during that particular moment, Kandi took to her Instagram to make light of the tension between her and her mother-in-law at the time and shared a photo the two of them had taken together, TheJasmineBrand reported.

“It’s so weird watching this episode knowing that #MamaSharon isn’t here anymore. I truly miss her! On tonight’s episode you’ll see her let me have it about the things that were said about her, but what you won’t see is how two seconds later she was ready to go have fun,” Kandi wrote. “The cool part about Sharon was that she would speak her mind & put you in your place if she needed to but as soon as she got it off her chest she was giving you hugs & wanting to have fun together. #RIPSharon.”

Every family has their mishaps, but we’re glad to know that even in grief Kandi can keep in mind of all the good times she shared with her husband mothers instead of focusing on the not so good times.