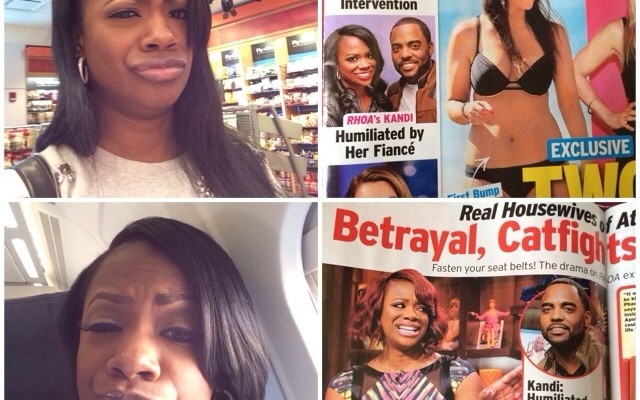 Kandi Burruss may have made the cover of this week’s issue of In Touch, but she is less than thrilled with the subject matter. The Real Housewives of Atlanta star took to her Instagram to share a photo of the cover, as well as shots of the article itself and her reactions to both.

On the upside, Kandi always manages to look on the bright side — in this case, that there is no such thing as bad publicity!

“The faces #IntouchWeekly got me making about this article they wrote about @todd167 & I ….. Humiliated?…. Uh, no. Well at least it was on the cover… Lol!” Kandi wrote next to the multiple images.

Kandi is making her signature “Huh?” face in the top left picture, with her standard “uh, hell no” expression right below.

The cover headline reads “RHOA’s Kandi, Humiliated by Her Fiancé,” and the article goes on to explain that Kandi is supposedly wedding-obsessed and going crazy planning all the little details, but meanwhile Todd is blowing off the event just because he told Andy Cohen on Watch What Happens Live that they are approaching the big moment on a day-to-day basis.

Um, yeah! That pretty much describes 98 percent of all couples engaged to be married! A lot of times, the groom is the least involved in the planning stages, while the bride is running the show. Todd is hardly “humiliating” Kandi. If anything, he’s showing her respect by stepping aside and letting her do the important stuff.

Do you think Todd “humiliated” Kandi on Watch What Happens Live? Sound off below!