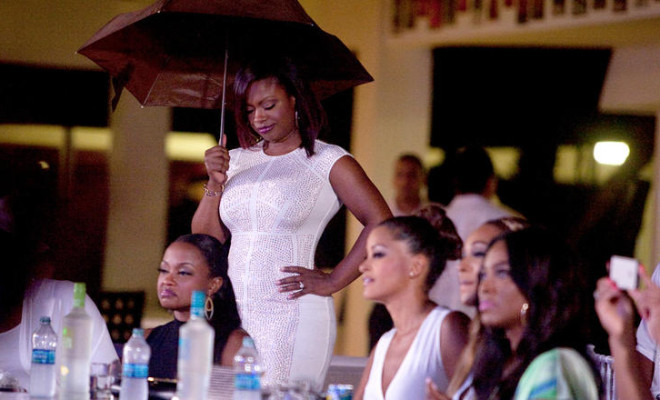 Last week’s episode of The Real Housewives of Atlanta was crazy. Let me just say, despite all the shade that was going on between Demetria and Phaedra, it was nothing compared to the argument that happened between NeNe and Claudia. First of all it was unexpected — nobody was expecting Claudia and NeNe to get into it. But at the same time what did you expect? Something is going to pop off if you tell somebody that you can’t believe they have a brain, but I don’t think anybody was expecting Claudia to react the way she did. Yes, I did feel like Claudia got the best of NeNe in the argument, because there was a lot that was said. Every time NeNe had something to say, Claudia had a comeback for it. It was funny and hilarious, and Claudia just seemed to be saying the things that everybody has at one point wanted to say, but probably never did. The reason why I say everybody is because I look at the blogs, I see the tweets, and there have been a lot of times that people over the years have said, “Why didn’t you say that?” Or “Somebody needs to tell her this!” Or “Somebody should do that!” So all the things that people have said on Twitter that someone should have said to NeNe, Claudia said that day. And it was hilarious to me.

Some people felt like NeNe got the best of Claudia in the argument, but I didn’t feel that way. For one that argument was even longer than what you guys got a chance to see. But on top of that I felt that sometimes it seems when NeNe gets frustrated or upset with someone, her go-to thing is to talk about is, “You’re broke, I have more money than you,” so I was used to that, it was nothing new to me. But the stuff that Claudia was saying was funny and she was very calm about it. I’m not a good arguer; I wish I could be as quick on my feet as NeNe and Claudia are. I’m not quick on my feet like that when it comes to going back and forth with somebody. I get angry, and sometimes it gets all out of hand for me, but for them they’re good at just going back and forth with their words. I don’t know if that’s a good thing or not, because I know NeNe has said she says things that she regrets later. But it’s of course better than someone getting violent; they just fought with words, and it was amusing.

OK enough about that, I know people have their lives, I do too. To me NeNe’s funniest moments of the conversation were when Claudia left the table. When NeNe kept talking it was so funny! When she started taking about that bob, I was looking at my own hair thinking, “Well I have a bob! Wait a minute, hold on, how are you going to talk about bobs like that?” But it just was so funny, she had us cracking up with the way she kept pretending she was rolling her hair up, it was just hilarious.

But outside of that, with all the drama that was going on between the girls, I felt like having another Bedroom Kandi party was the perfect interruption we all needed. We needed something that was going to be fun, that could bring everyone together, or at least get us on the same page for once, and I feel like I was able to do that. I know people are always asking why I’m constantly talking about sex, but when you talk about sex, you always laugh or smile, because it only brings happy thoughts. That’s the one good thing you can say about that, and when I brought out some of our Bedroom Kandi products and we played the game, the Bedroom Kandi version of hot-potato, it was hilarious. But better than that it helped everybody to mend their ill feelings for a moment at least, because people who didn’t even get along with each other still had to work together to play the game, which I thought was a great thing. People were laughing and smiling — there were no arguments, there were no side-eyes, and I felt like it was perfect. Ain’t no party like a Bedroom Kandi party, ’cause a Bedroom Kandi party don’t stop!

Anyway, so on to the bus. The bus ride went horribly. I thought that everybody was on the same page after doing the Bedroom Kandi party, but obviously not. I thought it was good that NeNe apologized, because she doesn’t normally apologize, and I thought it was a good thing for her to clear the air with everyone. But Claudia just didn’t want to accept the apology. She wanted to keep going on and on and on about why NeNe had said those things. Come on girl, can you just please just accept the apology and keep it moving? Or don’t accept the apology and be quiet. Nobody wants to keep going on about the same thing over and over again, so that was irritating to me.

But then she had to blast Porsha, which I felt was completely uncalled for. I didn’t even understand why she even had to bring that whole situation up. That’s one thing that I don’t like about a lot of the girls. It seems like they purposefully want to bring up negative things about you, to put you on blast, or to put everything out there. It’s not like Porsha was even the topic of that conversation, so I don’t know why she felt like that was the perfect time to blast Porsha. It was just really unnecessary, and that’s just how I feel about that. Who Porsha is dating or who did or did not buy Porsha’s car I don’t feel had anything to do with anybody on that bus, and I didn’t feel it was necessary.

So enough of that, at least from that point on we all were able to still put our negative feelings aside and make it to Demetria’s performance. I thought Demetria did an outstanding job. That was the first time I’ve ever heard her sing, and I thought her voice was beautiful. I thought she did a good job with her performance; she had a lot of personality on stage. You guys only got to see the one or two songs that they showed, but of course her performance was longer than that, and she did a great job. I don’t know if she could be a pop star. When I think of pop stars, I think of young teens, early twenties, so I don’t know if she is necessarily a pop star, but she is definitely an entertainer, and she definitely could put out an album. I think she definitely would have a lot of fans if she had the right team behind her, and I was glad we could be there to support her. The funny thing is she didn’t even have a clue about what went on in the bus, so luckily that whole negative drama missed her and didn’t affect her performance. Thank the lord, thank the lord.

All right, until next week! Everybody please follow me on Twitter. I know you like to go back and forth on Twitter, so feel free to go on my Twitter page and go back and forth with me @Kandi. You can hit me up on Instagram @KandiBurruss and follow me on my website Kandionline.com. And please go to BedroomKandi.com and book yourself a Bedroom Kandi party, because clearly a lot of us need to have a Bedroom Kandi party in our life! See you!