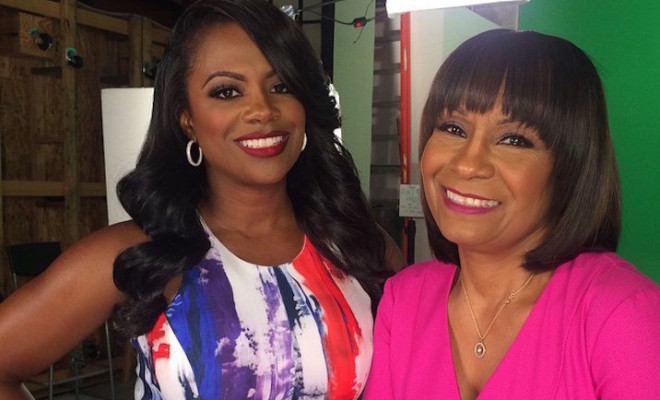 Kandi: I’m Glad My Mom is Making an Effort

Bravotv.com: Were you surprised things escalated the way they did between Mama Joyce and Carmon?
Kandi Burruss: I was surprised, but I should have known better. Things had been going pretty well between them before that point. I pushed it too far by suggesting they should talk alone. I felt like they were never going to get back on track after that conversation. Thank God they both decided not to continue the negativity the next day.

Bravotv.com: Do you think the brain surgery and medication could be to blame for your mom’s behavior as your aunts suggested?
KB: I don’t know if it’s the surgery. She had that surgery a long time ago when I was in middle school. But she is on a lot of different medications though, so I’m not sure what the side effects are. I do agree with them about the fact that she wants all of my attention. Anytime someone comes into my life and is around me a lot, she seems to find something wrong with them. It’s like she gets focused on pushing them out of my life.

Bravotv.com: What was going through your head when your mom made amends with everyone and promised to be a better mother and grandmother?
KB: I was so happy. I didn’t know what made her do a 180 overnight, but I was happy about it. I’m glad she is finally making an effort to push things in the right direction.

Bravotv.com: Do you think the mending and blending trip was a success?
KB: The trip was definitely a success! Carmon and my mom are still talking. My mother has been nicer to everyone, and she finally, officially moved into the house I bought her last year. You guys may not know, because all the craziness in my life doesn’t happen on TV, but I bought my mom the house last September and for whatever reason she became mad at me about something (as always), and she decided not to move. So the house had been empty all that time until now. And guess what — Carmon had all the remodeling done for my mom, so now my mom can’t say she doesn’t know what Carmon does. LOL! Carmon does pretty much everything under the sun that I need done.

Well thanks everyone for watching! I know you guys don’t understand my relationship with my family at times, but it is a real, unbreakable bond that we have. People always ask if that stuff is scripted, and unfortunately it isn’t. I’m thankful for Todd and the fact that he is committed to me and our family, no matter how crazy we may be. This was the end of the ski trip special, but definitely not the end of our families’ journey to continue mending and blending!