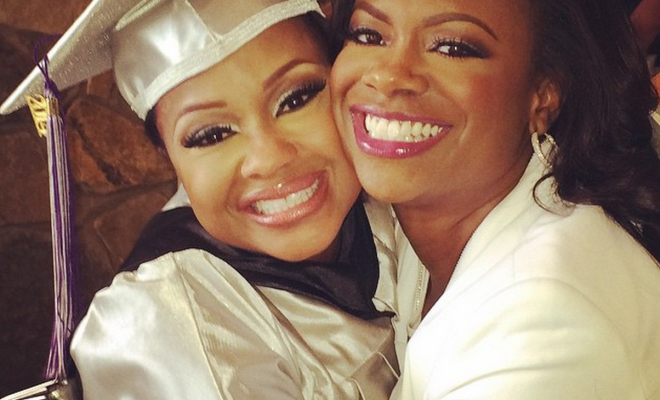 Bravotv.com: What have you been up to since last season and the wedding?
Kandi Burruss: Just getting used to being a wife and learning how to live life as a blended family. On the business side, I’ve been writing new music, revamping my Kandi Koated Nights show (as well as developing some other online shows), expanding my Bedroom Kandi Brand, and also maintaining my Tags Boutiques.

Bravotv.com: Were you nervous at all about having Kaela come live with you and Todd?
KB: Yes, I was a little, because Kaela is 18 and I want to build a good relationship with her. I never want her to feel like I’m the wicked step mom. I’m scared to put too many rules on her in fear of her feeling like I’m being too harsh, but there still have to be rules.

Bravotv.com: Was it difficult meshing you parenting style with Todd’s?
KB: Yes. Todd is a lot sterner than I am, and he feels like I’m not stern enough. We are still trying to find our happy medium.

Bravotv.com: How tough was it dealing with Apollo’s legal situation while being a friend to both Apollo and Phaedra?
KB: It’s very hard. Phaedra is always assuming I’m siding with Apollo, which isn’t true. Todd and Apollo became pretty good friends, so I would say he takes Apollo’s side a lot. Todd and I have serious debates over their issues. Sometimes I get to the point where I’m like, “Listen Todd, we shouldn’t be arguing about their problems.” It’s crazy really… At the end of the day Phaedra is my girl. I’m always going to be honest with her about what I think. Sometimes we have a difference of opinion, but it’s not because I’m taking anyone’s side against her. Never that! It always sucks when two people that you really like are going through something as crazy as this. I’ve always heard that when a married couple goes through a divorce the people close to them end up going through the divorce with them. I never understood what that meant before, but I do now.

I wanted to clear up something else. Some people felt that I was pulling the race card when I said I feel the justice system is harder on black men. I don’t want you to think that I feel like Apollo only went to jail because he was black. That was not was I was saying. I definitely feel that if you break the law, you should have to go to jail and do your time for the crime, no matter what color you are. BUT I feel like a lot of black men who have committed non-violent crimes get longer sentences than needed. For example, I have a family member who committed a non-violent crime and got 13 years in prison. He did his time, came home, and after a few years he committed another non-violent crime and now he’s serving over 20 years in prison. There are murderers and rapists who have gotten less time. When a man comes home with felonies on his record, a lot of times he can’t get a good job. So I just feel like it creates a cycle of repeat offenders. There has to be a better way… This is just my opinion.

Anyway I’m sure you all are going to go crazy on me for saying all that, but hey, “I said what I said.” LOL!

Please tweet me @Kandi or tag me on Instagram @KandiBurruss. Also visit KandiOnline.com to check out all the things I have in the works!