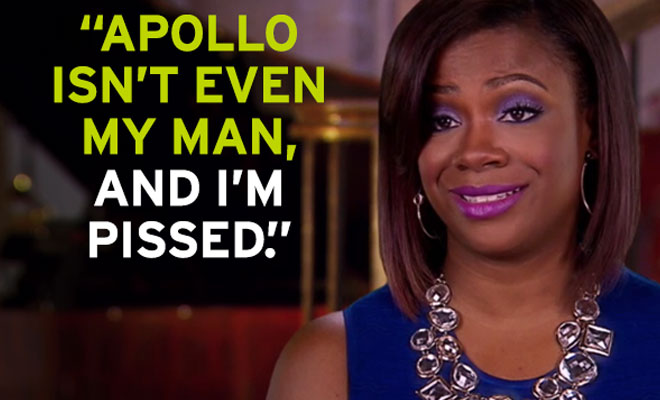 Kandi: “I Felt Bad for Kenya”

Bravotv.com: Were you worried at all about having your mom live down the street?
Kandi Burruss: No, not at all. It would be easier for me to stop by and check on her. She is getting older, so the closer the better.

Bravotv.com: How has the relationship between Todd and your mom improved since the wedding?
KB: It’s better. She hasn’t been talking badly about him anymore. They are cordial to each other.

Bravotv.com: Were you surprised your mom wanted an apology from Todd’s mom?
KB: Yes. I have no idea how my mom thinks Todd’s mom should apologize when she won’t apologize for the things that she said.

Bravotv.com: How shocked were you by Apollo saying he lied about seeing Kenya in LA?
KB: I was totally shocked. Over the last couple of years Todd and I had become pretty good friends with Apollo. I didn’t think he would just make up a story about Kenya offering him fellatio and seeing her in Cali for no reason. There had been some flirty comments and moments that had happened between them that made the whole thing somewhat believable, and when I saw that text from her to him a while back saying “Hey Babe,” I didn’t think it was appropriate. She said it was innocent, but I wouldn’t want another woman texting that to my husband, so I kind of didn’t know what to think. Kenya has definitely said the whole time that it wasn’t true, but with all the other stuff that had happened, I didn’t know whether to believe her. Apollo was our friend, so we definitely didn’t think he would keep a lie going like that for two years… Why? What was the point? We were shocked! I was just waiting for him to say he was joking or something. I felt bad for Kenya afterward. Don’t get me wrong, I know she’s done a lot of crazy things to make people pissed off, but accusing her of going around offering blow jobs just wasn’t right.