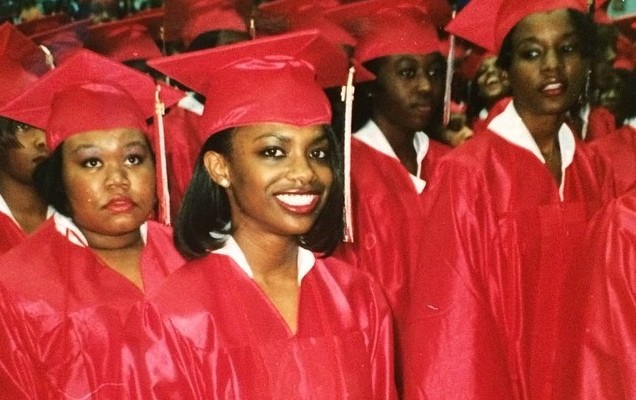 Kandi Burruss is well known as one of the Real Housewives Of Atlanta, but her rise to fame actually began long before she was highlighted by Bravo. The former Xscape star recently shared a Throwback Thursday photo with her Instagram followers, sharing touching memories from a special occasion she nearly missed out on.

By the time graduation day arrived, Kandi Burruss was already hitting the big time as one of the stars of the R&B group Xscape. Still, in spite of her blossoming musical career, she was intent on showing up for her graduation ceremony. But as the reality star recently revealed in a long Instagram story, she came close to missing this major milestone.

According to Kandi, her fellow Xscape band members were angry about her graduation ceremony attendance, as they were supposed to perform at a huge show that day. She did her best to squeeze in both obligations, but admits that she was forced to “rush out of the graduation, didn’t get to take pics with my family, and rush to the airport.” In spite of all this, she still was a bit late for her performance. What’s more, the other members of Xscape were “so mad they weren’t talking to me at first.”

Although this graduation drama created friction with her bandmates, Kandi feels that it was all worth it in the end. As she explained to Twitter fans, she’d already missed out on prom and multiple senior trips. Graduation represented the one normal high school experience she could enjoy while hitting the road with Xscape.

“#tbt my graduation day at #tricitieshighschool. This was a crazy day. My group #Xscape was mad at me for going to my graduation because we had a show that day. I had to rush out of the graduation, didn’t get to take pics with my family, & rush to the airport & my flight was delayed… When I got to the show the promoter still let us perform even tho it made the show start a little late. My group was so mad they weren’t talking to me at first. They did give me a cake tho. To be honest I was kinda mad at them because I felt like they should’ve come with me. I wanted them to celebrate with me because it was hard going on the road & still trying to keep up with my work at school. I knew that I was possibly gonna make my group lose money & it was selfish of me to go but I didn’t care. I had missed all the senior trips, senior prom, etc… But I refused to miss my graduation! Was it worth it?… To me it was! #memories #funnyhowlookingatapicturecantakeyoubacktothatmoment”

What do you think of Kandi’s decision? Sound off in the comments section below!