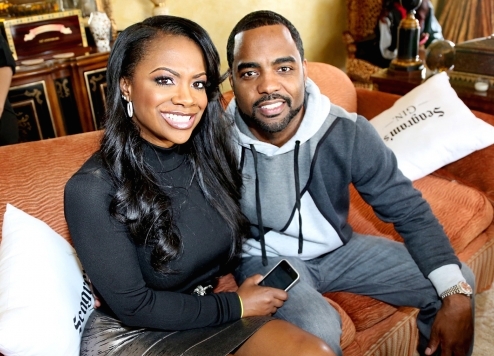 Bravotv.com: What was your first impression of Todd when you met him? Was there a spark there right off the bat?
Kandi Burruss: He seemed really quiet at first, but when we finally talked our conversation lasted all night long.

Bravotv.com: How did the “lap dance” come about during the Africa trip?
Kandi: It was Todd’s birthday. Some of the crew, Sheree, Todd, and I were in Phaedra’sroom acting silly. We started dancing, and I gave him a lap dance because it was his birthday. We were just acting crazy on our last day in Africa.

Bravotv.com: Were you worried about having Carmon so involved with the wedding after her blow up with your mom?
Kandi: No. She is my friend and she worked for me, so I wanted her to be a part of it. I wasn’t going to let the issue she had with my mom stop her from being a part of my wedding. My mom didn’t just have a problem with Carmon, she had a problem with the whole wedding. So if I worried about how my mom felt, there wouldn’t have been a wedding at all.

Bravotv.com: If you had to describe each of your aunts in three words, what would they be?
Kandi: Aunt Nora: Sweet, fun, firecracker
Aunt Bertha: Funny, honest, firecracker
LOL! I have to use firecracker for my whole family, because they will let you have it in the worst way if they don’t like you.

Bravotv.com: Is Weenie a nickname? If so, how did it come about?
Kandi: Weenie’s real name is Joyce. She’s named after my mom. When she was young, she used to be skinny so that they called her Weenie.

Bravotv.com: Why do you think your aunts changed their mind about Todd?
Kandi: My aunts want me to be happy. They feel like they should support my decision, and if it doesn’t work out, they will be there still. They never had a serious problem with him anyway. They were just sticking with their sister, but that was pushing me away and they don’t want to push me away. We were brought up to be a close family, and they want to keep it that way.

Bravotv.com: Where did you wear Reco’s blue “Smurf” dress?
Kandi: I never wore the dress. Last year for the 2013 Bravo Upfront party I asked Reco to make me a dress. It was supposed to be a long flowing dress, but when Kwame picked it up from Reco and brought it to my house the morning I was leaving for my flight…that was the dress. I was so mad. It was a tight blue turtleneck dress with a big blue flower on the shoulder. I looked like a smurf. It didn’t help that I had the blue scarf on my head that I sleep in, that made the pic look even crazier! LOL! Luckily I had a dress in my closet that Carmon had gotten for me that I had never worn, so I just wore that to the party.

Bravotv.com: Tan seemed a little nervous about having Reco make the dresses, did you have any hesitations?
Kandi: I wasn’t nervous, because Reco has made a lot of dresses for me in the past that turned out great. I knew that he wouldn’t allow his reputation to be ruined by messing up my dress. I had gone to a few stores, and I didn’t see anything I liked. I knew that Reco could give me the look I wanted.

Bravotv.com: Was Carmon’s reaction to Todd’s concerns about the wedding planning surprising to you?
Kandi: No. Carmon doesn’t take criticism well. She doesn’t want to hear it. In her mind she’s never wrong. I’m used to Carmon’s attitude, so nothing she says or does is surprising to me.

Bravotv.com: Why was Joyce saying that Todd was raised by a “pimp and a prostitute”?
Kandi: My mom was so wrong for this comment. Todd’s father died when Todd was about 3 or 4. I have no idea why my mom would say that. She claims she heard that from someone, but you would have to ask her.

Bravotv.com: Do you think Carmon overreacted about the conversation with Todd? Why do you think she was so upset?
Kandi: She says that Todd was being mean for no reason, and she felt like he was speaking for me. She was like, if you wanted to fire me, you should’ve done it and not send Todd to do your dirty work. I did not ask Todd to do anything for me. If I wanted to fire her, I would’ve told her. She just got sensitive and over reacted.

Bravotv.com: Has your relationship with Carmon improved now that she no longer works for you?
Kandi: She still works for me… LOL! I told her she could work for me as she looked for something else, but it doesn’t seem like she’s looking for anything, LOL! That’s what happens when your friends work for you.