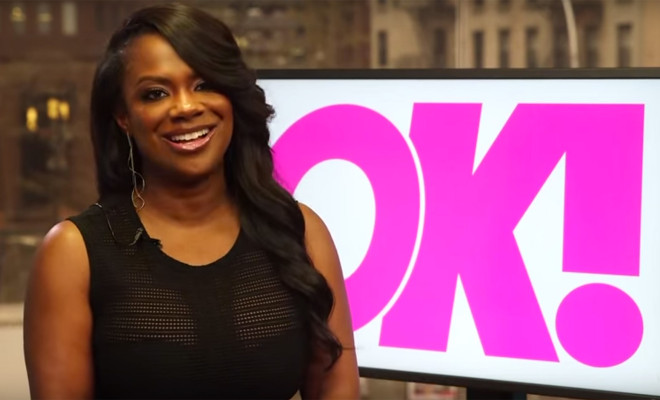 Kandi Burruss has been too busy relishing in the joy of her second pregnancy to be concerned with any of the negative aspects she faced on season seven of “Real Housewives of Atlanta.” But with filming for season eight underway, the reality star may just find herself in the thick of the drama regardless.

During a recent interview with OK! Magazine, Kandi rehashed some of the events that took place on the last season of RHOA, from her mother’s apology to her husband Todd Tucker to her seemingly ended friendship with Phaedra Parks.

Fans were pretty surprised when Kandi’s mom, Mama Joyce, gave her husband an apology for all the thing she had said about Todd’s mother, Miss Sharon. Although Kandi noted she wasn’t expecting her mother to say sorry either, she said what fans saw on cameras wasn’t the sincere apology she was hoping her mother would have given Todd.

“My mother apologized and it was a cool apology, but Todd was like that’s not genuine. Just because she hit him with the ‘Oh I was just saying what somebody told me,’ so it was like she was kinda passing the buck off to somebody else a little bit,” Kandi said. “But it’s cool, she gave him another genuine apology later.”

Had Kandi popped up pregnant two seasons ago, we would have just known that Phaedra would have played a part in planning her baby shower. But as fans know, the former besties had a bit of a falling out on season seven, which Kandi still doesn’t quite understand.

Season seven was maybe the most dramatic season Phaedra’s ever faced. Her husband Apollo Nida was sentenced to eight years in prison, and on the reunion special Phaedra said that Kandi just wasn’t giving her the type of support that a friend should have. However, Kandi disagrees.

“Whenever we talked or we saw each other she never said anything like she felt like I wasn’t doing something or whatever. Never. So when I first heard Porsha [Williams] and NeNe [Leakes] mention, ‘Oh Kandi, you and Phaedra need to work out your issues,’ I’m like what issues are they talking about? In my mind I’m thinking they’re trying to come up with some issues for this show, because even after I had brought it up to her in the show when I heard them say… ‘Did I do something?’ She’s like, ‘No, no. It’s okay, I just felt like maybe you should have called me something something.’ But she never been like how she’s crying in the scene with them. She never did that with me,” Kandi explained. And then she’s at my house partying with me and my friends, and here it goes I see you on TV crying saying I’m not a good friend to you. What?”

As for where Kandi and Phaedra’s friendship stand today, Kandi says she’ll always be cordial but the trust she once had in her cast mate no longer exists.

“Whatever at this point. It’s like a weird trust thing for me now. Now I’m like, ‘Do I trust you? Do I know if what you’re saying is true?” she said. “And you know I’m cordial to everybody, but to go above and beyond is just…”

We’re curious to see how Kandi will handle all the drama with her cast mates, especially Phaedra, when she returns to RHOA with a bun in the oven.

Do you think Kandi and Phaedra will ever be friends again? Tell us!